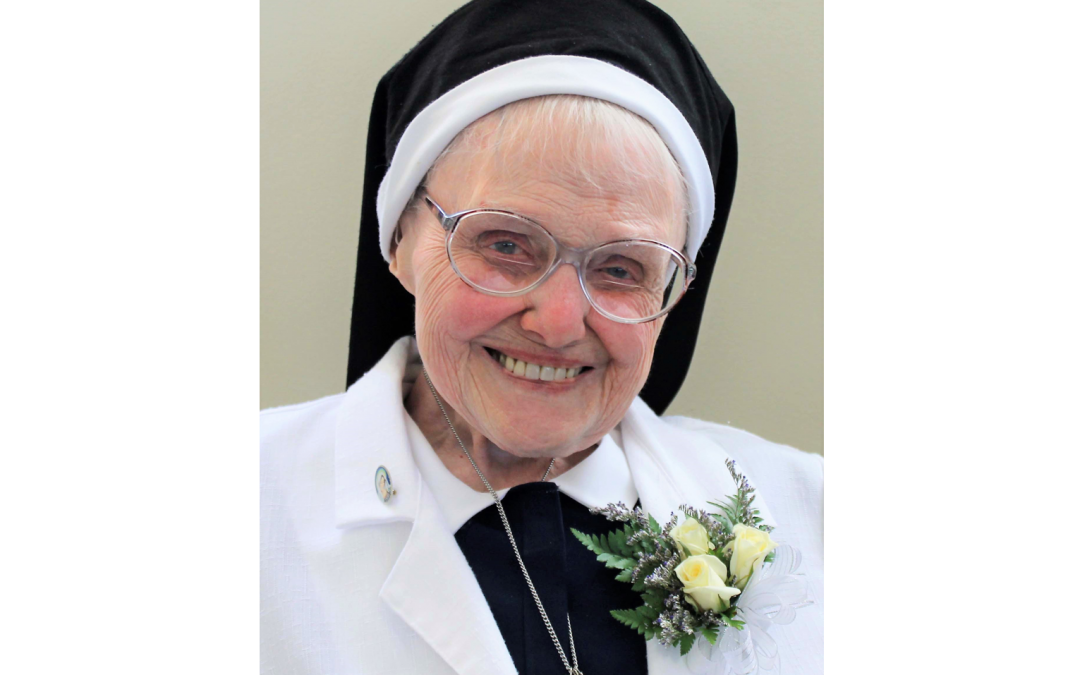 “To [the one] who wishes to walk in the path of virtue, nothing is more necessary than the reading of spiritual books.” – St. Athanasius

Few people loved great Catholic spiritual literature more than Sister Mary Vincent Fritton. St. John of the Cross and St. Therese of Lisieux were life-long spiritual mentors. Such writers underscored the important themes Sister considered necessary to the Christian life: prayer, Scripture, worship and the classic Christian virtues. These saints held key insights to citizenship in God’s kingdom, which is where she placed her highest loyalty and allegiance. She was not a Christian who held tightly to this world, but sought to live – and to prepare others – for the world to come. Sister, 98, transitioned to eternal rest on March 10, 2020, in the Mother House. She was an SCL for 77 years. She entered the SCL Community on Sept. 1, 1943 and professed vows as Sister Mary Vincent on March 6, 1945.

Sister Mary Vincent was born on Sept. 8, 1921 in Topeka, Kan., the youngest of three daughters of Benno V. and Josephine (Zeidler) Fritton. A strong German Catholic heritage predominated on both sides of her family. She attended St. Joseph’s (Topeka) Grade School and Topeka Catholic High School (now Hayden High School) before pursuing a music education degree at Saint Mary College, Leavenworth. Music came easy, and she had a fine operatic voice, which she used teaching vocals and directing voice choral groups as a high school educator. She also loved Latin and teaching Holy Scripture. Students who experienced her as an exacting instructor, also knew she was committed to their preparation and their spiritual life. While she taught with conviction and zeal, as one who sought approval from her Lord, she also could be kind, gentle and funny.

After teaching for several years, her love for people and spirituality led to a post-graduate certification in clinical pastoral education. This training enabled her to provide important pastoral care in several hospitals and Catholic ministries in the second half of her ministry. Sister served as a listener, spiritual counselor, friend and supporter to patients and their families. Whether serving in acute care hospitals or long-term nursing homes, she noted, “The heart of caring has the same ingredients of love, respect, and friendship.” Sister especially treasured working with cancer patients and the dying. She once remarked, “It’s the greatest privilege on earth to assist the dying on their way to eternity.” Like her mentor, St. John of the Cross, she realized that while “God leads every soul by a separate path,” she was determined – no matter the malady or the “dark night of the soul” – to help each person find a path to God’s healing grace, in this life or the next. While she strove to embody Jesus’ care of the sick and needy, she also felt such ministry drew her closer to Christ.

Later in life, Sister Mary Vincent’s love of Latin and spiritual writers found new expression. Her meticulous, sharp-eyed nature made her a gifted proofreader. She provided valuable aid to Father Thomas Dubay, S.M., a noted theologian who wrote over 20 books on Catholic spirituality. Sister Mary Vincent proofread at least two of his works, both published by well-known Ignatius Press. In one acknowledgment, published in 1985, he writes, “Sister Mary Vincent Fritton, S.C.L., once again passed her sharp eyes over these pages and freed them of small typographical errors.” Her multifaceted abilities in singing, teaching, administration, pastoral care and proofreading were gifts to associates and friends.

Preceding Sister Mary Vincent in death were her parents and her two sisters, Cecilia Fritton Shaughnessy and Florence Fritton Kelly. Survivors include one cousin, Joe Fritton, who lives in Topeka, Kan.; nieces and a nephew; and her SCL Community.