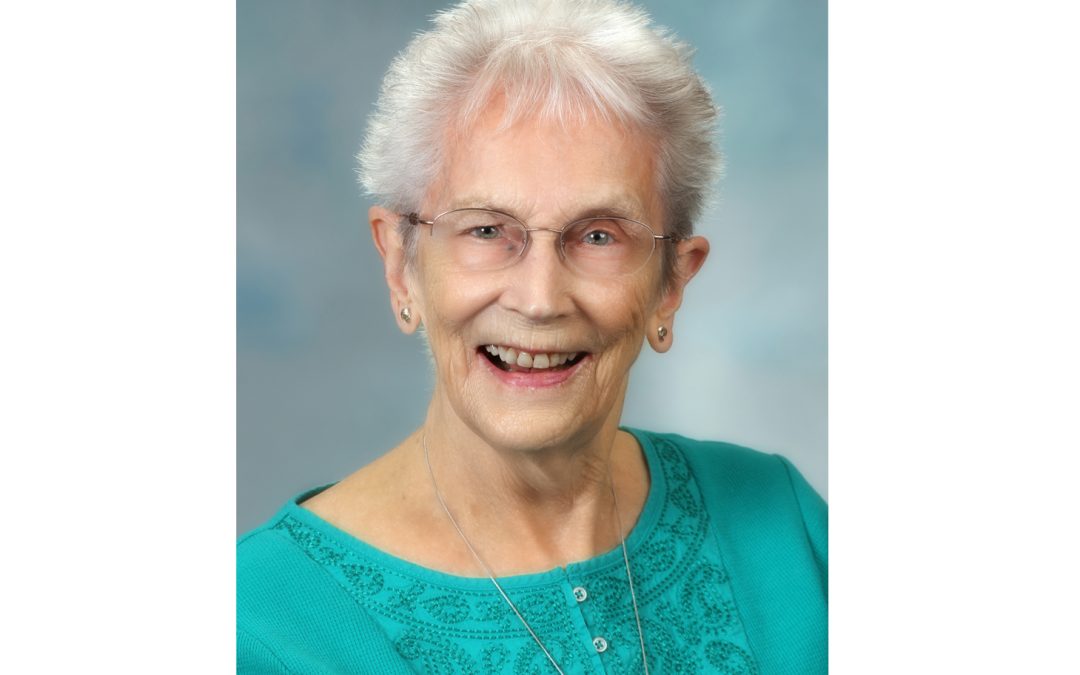 It is wisdom to pause, to look back and see by what straight or twisting paths we have arrived at the place we find ourselves. – Mother Xavier Ross

The Sisters of Charity of Leavenworth (SCLs) mourn the loss of Sister Irene Skeehan, 90, who died on March 10, 2022, in Ross Hall at the SCL Mother House in Leavenworth, Kan. She was an energetic, compassionate, and creative teacher, missionary, and pastoral minister who developed a “social justice soul” after spending 3 impactful years among the destitute and needy in Peru. Whether she was in a classroom teaching theology, playing a guitar and singing in worship, helping a young woman get her GED, or visiting with prisoners, she worked tirelessly to lift all people.

Irene Skeehan was born on May 15, 1931, in Tulsa, Okla., the oldest of three children of Leonard and Irene (Kelly) Skeehan. She inherited a strong Irish Catholic heritage from both sides of her family. By age 5, she wanted to be a priest and her urge to cross new boundaries never left her.

A strong student, she graduated from Marquette Elementary School and Marquette High School in Tulsa, Okla. Soon after, she entered the SCL Community on Feb. 14, 1949, and professed vows as Sister Marie Colombiere on Feb. 15, 1951. She later returned to her baptismal name. In 1963, she received a B.S. in elementary education from Saint Mary College, Leavenworth, Kan. Eight years later, she earned a Master’s degree in theology from the University of San Francisco.

Teaching was a great love of Sister Irene’s life and ministry. She spent 12 years as a grade school and middle school teacher in Kansas, Montana, Wyoming, and Missouri. She made learning enjoyable and her students loved her easy laugh and adventurous spirit.

In 1963, Sister Irene was one of the first five of her order to serve as a missionary and teacher in Peru. Her 3 years in Latin America had a “great and permanent impact” on her life. She felt like a pioneer and developed a strong proficiency in Spanish, which she used in subsequent assignments. She carried an undying and life-long love for the people of Latin America. She was especially empathic with Peruvian women and their struggles to find self-respect in a male-dominated culture. The need to empower women became a theme that animated the rest of her life.

In 1967, she returned to the U.S. to study theology in what she termed the “heady days of post-Vatican II renewal.” She taught high school for two years while finishing her master’s degree. Later, she and Sister Mary Cecile Breen were asked to provide theological workshops for SCLs across the U.S., what she humorously called, “Cele and Irene’s Traveling Salvation Show.” In 1971, she joined the faculty at Saint Mary College to teach theology for 3 years before serving the St. Charles Parish in Kansas City, Mo., where she coordinated adult education and social justice concerns for 4 years.

In the late 1970s and 1980s, she became the first female to serve as the director of campus ministry for the University of Missouri in Kansas City. She then worked for the GED Center in Kansas City, Kan., where she taught GED and ESL classes and provided social services to students from Cuba, Haiti, Iran, Korea, Laos, Mexico, and Vietnam. She later returned to Saint Mary College to direct a program for the educationally disadvantaged, and eventually became director of admissions and adult recruiting. During these years, she also cared for her aging parents, and helped her father overcome alcohol addiction—something she considered one of her greatest accomplishments.

In the 1990s, Sister worked in local parishes in Kansas City and Denver before taking a lengthy sabbatical in 1999. During this time, she became the founding chairperson of the SCL social justice committee, something which energized her spirit.

A highlight of Sister Irene’s life was returning to Peru at age 72 in 2003. She went with other SCLs, but she was the only one of the original five able to make the trip, which coincided with the 40th anniversary of the Community’s work in Peru. A touching moment during her visit occurred when the little children of the local parish in Talara requested her autograph—a gesture which reflected the positive impact the SCLs had on the community. Sister Irene summed up the SCL’s efforts in Peru by saying, “The single most important achievement of our work over the past 40 years is that we’ve trained the people.”

In her later years, Sister Irene worked for 3 years as a bilingual aide at Bishop Ward High School in Kansas City, Kan. In 2005, she served as one of the founding SCLs at Cristo Rey (Kansas City) High School, where she worked as the director of missions for 5 years while helping to establish the school as an SCL-sponsored ministry. Her years at Cristo Rey were among her most cherished. She remarked, “I was thrilled to work with Sister Vickie Perkins, the founding president of the high school.”

In her retirement years, Sister Irene worked as a volunteer with Alzheimer’s patients at the Senior Behavioral Health Center at Saint John Hospital in Leavenworth. She also took time to travel and had a memorable trip to Hawaii with her sister and brother-in-law.

A quote by Ilia Delio, a Franciscan Sister and one of Sister Irene’s favorite theologians, sums up her life: “Life in God should be a daring adventure of love—a continuous journey of putting aside our securities to enter more profoundly into the uncharted depths of God.”

Preceding Sister Irene in death were her parents and one brother, Leonard A. Skeehan, Jr., and one niece. Survivors include one sister, Alice (Skeehan) Childers, as well as 2 nephews and 2 nieces, and 3 grandnieces and 3 grandnephews, and the SCL Community.