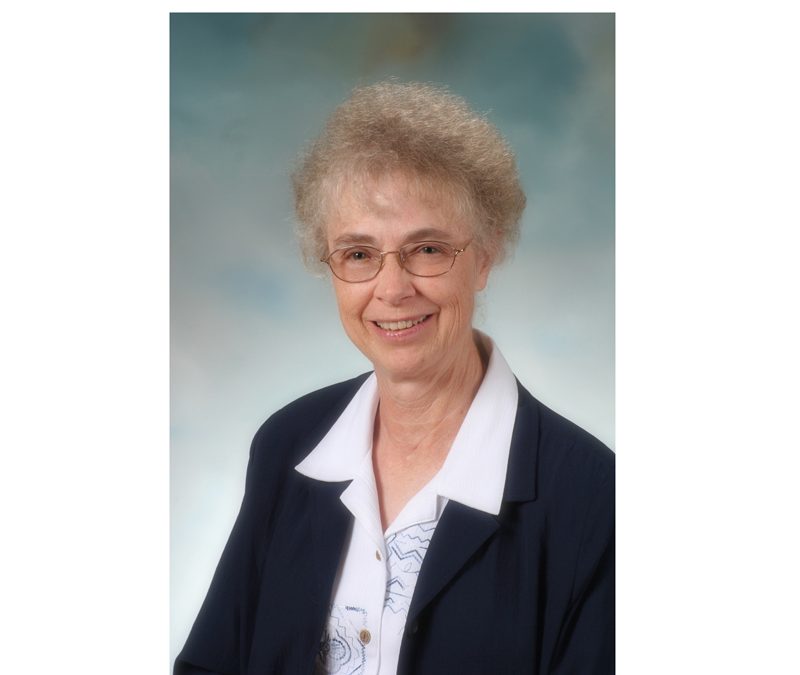 “Let them praise his name with dancing and make music to him with timbrel and harp. For the LORD takes delight in his people; he crowns the humble with victory.” – Psalm 149:3-4

Bonnie Ann Bachle was born on July 29, 1940, in Oklahoma City, Okla., the first and only girl of three children of Carl and Jean (Perry) Bachle. Her father chose the name “Bonnie” because of a singer he liked on the radio, not knowing that dancing would be her talent. At age 7, she took up ballet and tap at a local studio. Inspired by her instructor, she attended numerous recitals throughout primary and secondary school, sometimes to the chagrin of her two younger brothers who had to tag along. She graduated from John Carroll Grade School and Bishop McGuinness High School in Oklahoma City.

She entered the SCL Community on Aug. 30, 1960, and professed vows as Sister Jean Clare on Sept. 2, 1962, and later returned to her baptismal name. In 1965, she received a B.A. in English from Saint Mary College, Leavenworth, Kan., where she also took classes in modern dance. Nine years later, she completed a M.A. in dance from the University of California at Los Angeles.

From 1962 to 1968, Sister Bonnie taught in schools in Montana, Colorado, and Missouri, and often led dancing classes for high school students. In 1970, she returned to Saint Mary College to teach modern dance and ballet. She also mentored students in several forms of dance (such as jazz, folk, and tap). Dancers were often featured in the school’s spring concerts, and by 1975, Saint Mary’s offered a minor in dance. Sister Bonnie once commented, “Dance keeps me more alive. It’s invigorating and keeps things happening inside the brain as well as the body. You experience the total person in dance.” She continued to teach until 1979.

In 1980, she joined fellow Sisters Eileen Sheehy and Susan Newland in pastoral ministry assignments in various parishes in Missouri, Colorado, and Mississippi, often traveling to different churches on the same day. The collegiality she received from her partner Sisters and the blessings she derived from ministry to people in the parish made this the most meaningful work of her life. She worked in pastoral ministry for 30 years, until her retirement.

In 2010, during her 50th anniversary with the SCL, she reflected on her life and ministry, “Never would I have dreamed that I’d be able to keep on with my dancing days as a Sister of Charity.” She added, “When I joined the Sisters of Charity, I had hope of giving continual thanks to God for all of the blessings in my life. So, as I celebrate with all my SCL companions on the journey, I dance and sing out with joy, “Deo Gratias, Alleluia!” (“Thanks be to God, God be praised.”)

Preceding Sister Bonnie in death were her parents. Survivors include 2 brothers, John Bachle and William Bachle, as well as 4 nephews and 3 nieces, and the SCL Community.

Watch Sister Bonnie dance to “Singing in the Rain” in 2008 as part of the 150th celebration of the SCL Community, also known as the “Monster Piano Concert.” View it here at https://vimeo.com/685591392.