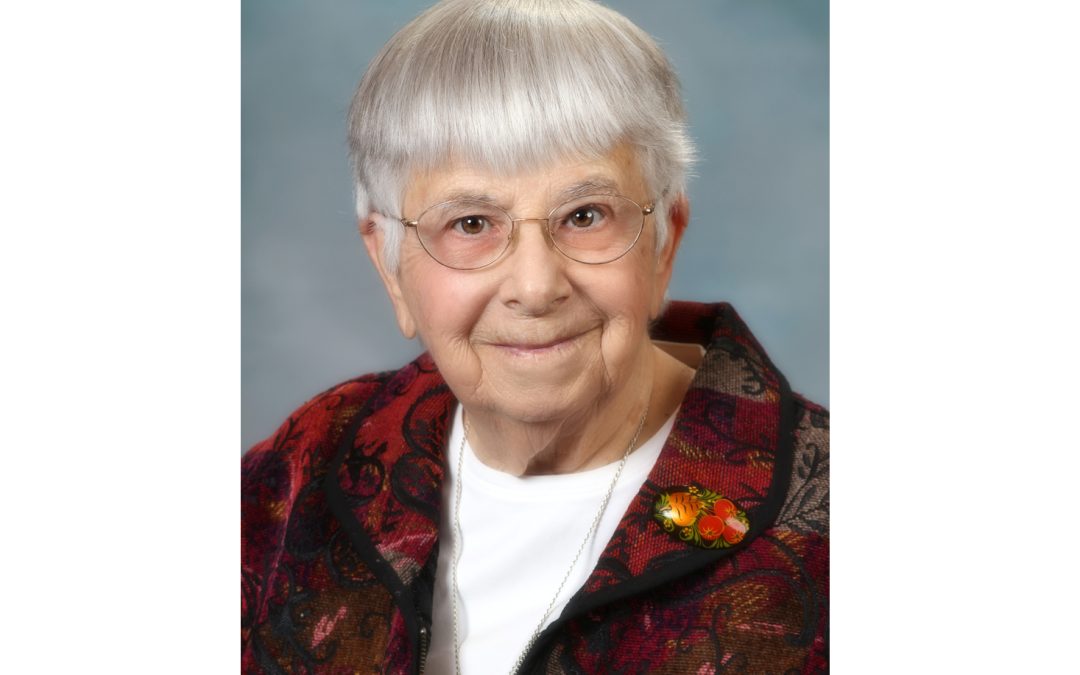 Sister Frances Russell, 90, a Sister of Charity of Leavenworth (SCL) for 72 years, died on March 13, 2022, in Ross Hall at the SCL Motherhouse, Leavenworth, Kan.

She was described by Sisters, colleagues, family, and friends as a teacher, social worker, mentor, advocate, listener, and connector, but all these words fall short without understanding the generosity of spirit which transcended all she did. She embodied compassion, empathy, and genuine caring for others, especially the downtrodden, oppressed, and needy—not because it was easy, but because it was the right thing to do. Friends were amazed at her bravery and resilience, and her ability to rise to meet any challenge needed to help others.

Frances Russell was born on Sept. 19, 1931, in Kansas City, Mo., the third of four daughters to Francis and Catherine (Cashin) Russell. Her childhood was marked by a strong Catholic faith and a love for family, who called her “Kitty.” She attended Visitation Grade School and Bishop Hogan High School in Kansas City, Mo. She had deep reverence for SCLs, it was her mother’s wish that one of her daughters would be one. SCLs taught her to be open to new experiences and to listen to others.

In her sophomore year, her father developed a malignant tumor in his spinal cord and remained bedridden for life. The tragedy brought the family closer—the sisters remained best friends for life—and her father’s resilience and zest for living became a model to follow. Though confined, he remained interested in politics and the world-at-large, as did his four daughters.

After a year of college, Frances entered the SCL Community on Aug. 18, 1949, and professed vows as Sister Francis Assisi Russell on Aug. 15, 1951, before reverting to her baptismal name. She completed a bachelor’s and master’s degree in education at Saint Mary College in Leavenworth.

Sister Frances taught in elementary schools for 14 years in Kansas and Montana. She loved teaching and working with small children. At her last assignment at Most Pure Heart of Mary School in Topeka, Kan., she came in contact with orphaned children, many who suffered from abuse and neglect. She saw real need for the first time in her life, which deeply affected her. She decided to start a second master’s degree in social work at St. Louis University, which she completed in 1967.

For the next 30-plus years, she ministered as a social worker in Kansas, Colorado, and Wyoming, and also taught social work for 4 years at Saint Mary College. Along the way, she worked in a variety of ministries and extended compassion to all kinds of people: children, the homeless, refugees, and those oppressed by other disparities.

As administrator of St. Vincent Home for 7 years in Topeka, she transitioned a custodial care facility into a residential treatment program, which addressed the mental health needs of children. In 1979, she got involved with L’Arche, a community in Canada noted for working with people with intellectual difficulties. In 1980, with the help of a Dominican Sister, she started Siena House, a Catholic Work House and homeless shelter in Cheyenne, Wyoming. Named after the saint, Catherine of Siena, the ministry emphasized peace, non-violence, and Christ’s advocacy for the poor. She listened to the poor and their stories and learned how violence can oppress others. She also saw how prayer made a difference in people’s lives.

Cheyenne was also the home of Francis E. Warren Air Force Base. In 1982, then-President Ronald Reagan announced plans to bring MX missiles into southeast Wyoming as a military defense initiative, thereby, making Wyoming a nuclear superpower, and bringing money into the state’s economy. Peace activists, however, took issue with the missiles and held protests at the base. Soon, Sister Frances became a peace organizer and then a spokesperson. She eventually challenged then-congressman (and former Vice President) Dick Cheney to a debate over the efficacy of missiles. Not intimidated, Sister Frances more than held her own. She was a strong advocate for peace, but not without a cost–she received death threats for her opposition.

Though costly, Sister Frances’ work in Cheyenne also received much positive attention. Colman McCarthy, a Washington Post journalist, wrote a widely-read column, “34 Years as a Participant in Pain,” in which he lauded Sister Frances as a social worker and peace advocate. Soon, she was nominated and then received the award for social worker of the year from the National Association of Social Workers (NASW). Upon accepting, she said, “We all need to do more to make this a more peaceful world.”

For the rest of her career, Sister Frances continued to speak out and show others how to be more compassionate and make the world more peaceful. Whether she was speaking out against nuclear arms or counseling her nieces and nephews, her goal was to connect to people and connect people to each other, so all might work for each other’s benefit. She once said, “I now realize that whole societies are orphaned and that only in a world community built on justice can life for any person flourish.”

In retirement, she worked as a volunteer at All Saints School in Kansas City and taught English to Spanish-speaking middle school students. She also spent time aiding the SCL’s social justice office. Sister Frances loved to read, journal, and spent time in poetry groups. She also stayed connected with her family and was a noted saver of photographs, which she kept on bulletin boards, especially of new infant arrivals. She once related that her call to charity had “changed significantly over the years,” but her prayer was to work “for a safer and better world for those who have no security, no concept of privilege.” She considered her long life in ministry as one of “privilege and grace.”

A vigil will be held at 7:00 p.m. on Monday, April 4, in Ross Chapel, SCL Mother House, Leavenworth. Mass of Christian Burial will be celebrated in Ross Chapel at 10:30 a.m. on Tuesday, April 5. Interment will follow in Mount Olivet Cemetery, Mother House grounds. Due to COVID-19 restrictions, attendance is restricted to only invited guests. Memorial contributions can be made to the Sisters of Charity of Leavenworth, 4200 S. 4th Street, Leavenworth, KS 66048. Arrangements made by R.L. Leintz Funeral Home, Leavenworth.