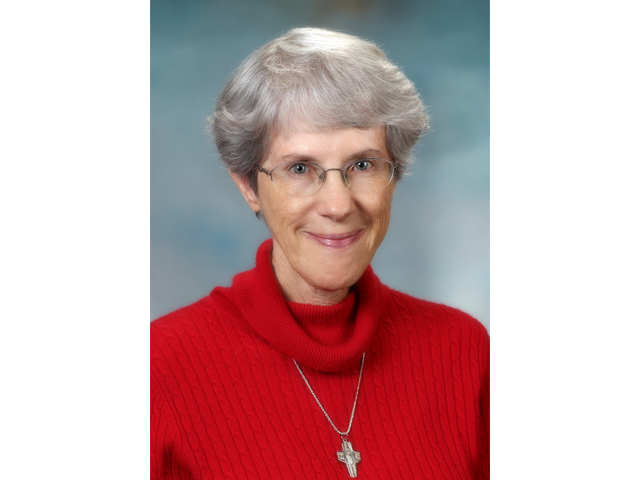 Sister Marianna Bauder consistently and persistently chose life and lived life to the fullest. Despite facing many serious health challenges over the years, she possessed tremendous drive and energy. She was a beloved leader and a positive presence to those she served and with whom she served.

Sister Marianna, 75, transitioned to eternal life on Jan. 21, 2019; she died at Saint Luke’s Cushing Hospital, Leavenworth. An SCL for 57 years, Sister was a leader in the healthcare ministry and in the SCL Community.

Mary Anna and her twin brother Joe were born Sept. 13, 1943 in Leavenworth. Elmer and Gertrude Zeugin Bauder later had four more children. From an early age, Mary Anna thought about becoming an SCL. She entered the Sisters of Charity of Leavenworth (SCLs) in August 1961 with Sister Helen Bristow, her cousin. She professed vows as Sister Gertrude Therese on Sept. 2, 1963, and later took the name Marianna.

Health issues delayed Sister’s first mission as a teacher. She soon realized that healthcare was her calling. She earned a degree in chemistry and biology from Saint Mary College, Leavenworth, and completed a medical technology internship at Research Hospital, Kansas City, Mo. Sister Marianna worked in the laboratory at St. Mary’s Hospital, Grand Junction, Colo., for eight years. She next earned a master’s in administration from the University of Notre Dame and applied her innate talents and organizational skills to leadership positions in SCL hospitals. Sister first served as assistant administrator at St. Francis Hospital, Topeka, Kan. She subsequently was president and CEO of St. Mary’s Hospital, Grand Junction, Colo., and of Saint Joseph Hospital, Denver.

Sister Marianna held high expectations for quality care and excellent service. She cultivated loyalty among the people with whom she worked, knowing many by name. They respected Sister Marianna as a genuine and faith-filled leader. She also had a heart for persons who were poor. She helped establish Marillac Clinic, Grand Junction, and Clínica Tepeyac, Denver. Under her leadership, Saint Joseph Hospital expanded its reach globally, providing needed equipment and supplies for health facilities in struggling countries. In her next ministry, Sister Marianna served on the SCL Community Council for 12 years. She then became the first executive director of Leaven Ministries, the sponsor of SCL Health. Sister moved to the SCL Mother House in 2012 where she was assistant coordinator from October 2015 to May 2017. In May 2017, she moved to Ross Hall.

Family was always important to Sister Marianna: her Bauder and Zeugin families and her SCL family. She was fun-loving and enjoyed card games and gatherings.