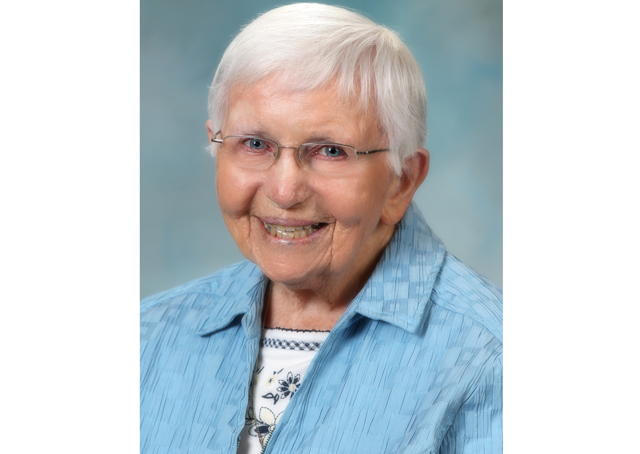 In her Golden Jubilee reflection, Sister Mary Patricia Kielty referenced this quote. She also shared that learning to work with the poor in Peru and Bolivia was the most challenging, satisfying and wonderful experience that deepened her faith in God. Sister Pat, 92, died in Ross Hall at the SCL Mother House on December 14, 2018. She was an SCL for almost 64 years — 35 of which she served in the SCL South American missions as a nurse, health educator, diocesan health coordinator and other roles.

Mary Patricia was born Oct. 27, 1926 in Tilden, Neb., the oldest of three children of Bernard and Kathryn Stanton Kielty. Following high school graduation, Mary Patricia studied nursing at St. Joseph’s Hospital, Creighton University, Omaha, and earned her nursing certificate. She had found the Sisters very pleasant in her hometown vacation schools, but she was bewildered by the reserve of the nursing school Sisters and lack of personal contact with them. This suppressed any thoughts of a religious vocation for the young woman. After graduation, Mary Patricia worked in several hospitals, including Saint Joseph, Denver, where the smile of an SCL (Sister Kathryn O’Neill) made a lasting impression. A few years later in February 1955, Mary Patricia entered the SCL Community. She professed vows as Sister Bernard Mary on Feb. 21, 1957, later returning to her baptismal name.

In late 1969, Sister Pat traveled to South America to attend language school and to begin her lengthy ministry in the SCL missions. For approximately 20 years, she worked with farm families in the mountains of Peru in areas where there were no physicians. Her legacy lives on. Thanks to Sister Pat’s attentive care, a badly crippled child is a school teacher today and is able to make the four-mile walk to her school. The Al-Anon group that Sister Pat started in Talara, Peru, continued after her departure — a credit to her ability to identify and provide needed programs. Sister Pat had an innate spirit that drove her to seek better ways to serve people. She was a multi-faceted and curious person who loved nature, technology, outer space and science. She was quiet and intense, restless and open to change, and she enjoyed a good chuckle, fiestas and card games.

In 1995, she received the Dorothy Vossen Excellence in Nursing Practice Award from Creighton University. In 2005, Sister Pat returned to the United States. From 2006 to 2011, she volunteered at Saint John’s Health Center, Santa Monica, Calif. Sister Pat retired to the SCL Mother House in 2011 and moved to Ross Hall in April 2018.

Preceding her in death were her parents; her stepmother Lillian Clark Kielty; and her brother Gerald Bernard Kielty. Survivors include her sister Ellen Anderson (Eugene), Parkville, Mo.; sister-in-law Donna Kielty, Norfolk, Neb.; nieces and nephews; and her SCL Community.