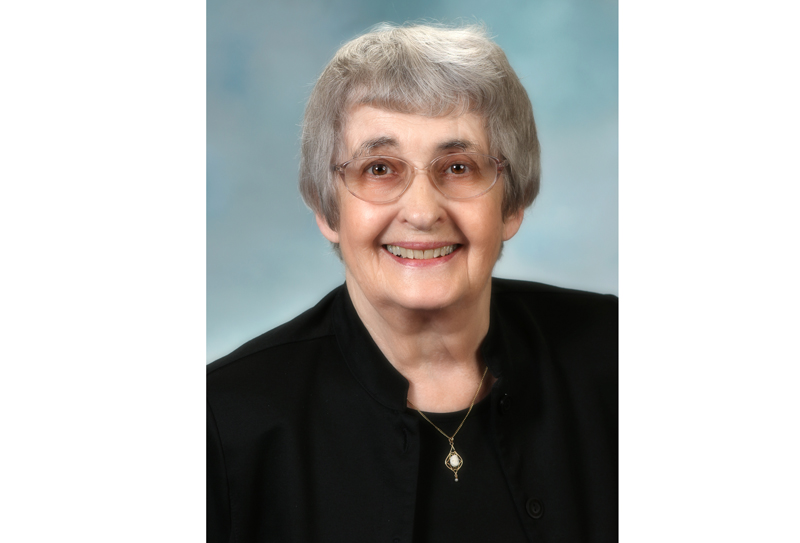 “Whatever you do, in word or in deed, do everything in the name  of the Lord Jesus, giving thanks to God the Father through him.” – Colossians 3:17

Over almost 69 years as a Sister of Charity of Leavenworth, Sister Susan Pryor served faithfully in diverse ministries in the name of Jesus. She preferred teaching to administration and did both to help educate and form young children whom she loved. She did pastoral outreach to the elderly and shut-ins in parishes and administered a residential facility. She concluded her active ministry by working with and on behalf of two archbishops in the Archdiocese of Kansas City in Kansas. Five years after her retirement, Sister Susan, 88, died in Ross Hall at the SCL Mother House on May 10, 2019.

Born in Pittsburg, Kan., Mary Sue was the first child of James and Elizabeth Quinn Pryor. A brother, twin sisters and another brother followed. Mary Sue graduated grade school and high school in Oswego. After attending Girls’ State at the University of Kansas, she set her sights on college in Lawrence. However, her mom insisted on Saint Mary College, Leavenworth, to further nurture her daughter’s faith. Following a bout of homesickness, Mary Sue grew to love the college; she also recognized her call to religious life. She entered the SCL Community on Aug. 18, 1950. She professed vows as Sister James on Aug. 15, 1952, and later returned to her baptismal name, Sister Mary Susan.

From August 1952 through August 1968, she had 15 missions in 16 years – most teaching primary grades. At one time in Billings, Sister Susan had 70 first-graders in a classroom. She arrived at Our Lady and St. Rose Parish, Kansas City, Kan., in August 1968 — a ministry Sister Susan considered very special. Over 18 years at this parish, she was a teacher, principal and then pastoral associate. She wrote, “I have never felt closer to the Lord nor been rewarded with such a feeling of doing the Lord’s work than there … part of my heart will always be there.” Sister Susan transitioned from educating young children to ministering to older adults and shut-ins. She continued this pastoral ministry at Marian Hall, a residence for the elderly. Over 11 years, Sister was manager and then administrator. Her background included a bachelor’s degree, two master’s degrees and a license in adult care home administration. Between times, she enjoyed travels with her good friend Sister Lucy Downey.

Sister Susan’s final active ministry — one also very important to her — placed her as a secretary and aide to Archbishop Ignatius J. Strecker. She enjoyed working with the archbishop on the book he was writing, The Story of the Church in Kansas. Sister became lasting friends with Archbishop Strecker and his family. She continued her ministry to the archdiocesan Church assisting Archbishop Joseph F. Naumann. Sister retired from active ministry in July 2014. She moved to the SCL Mother House in August 2016. Her Irish roots, strong values and prayer were her guiding lights through all her years.