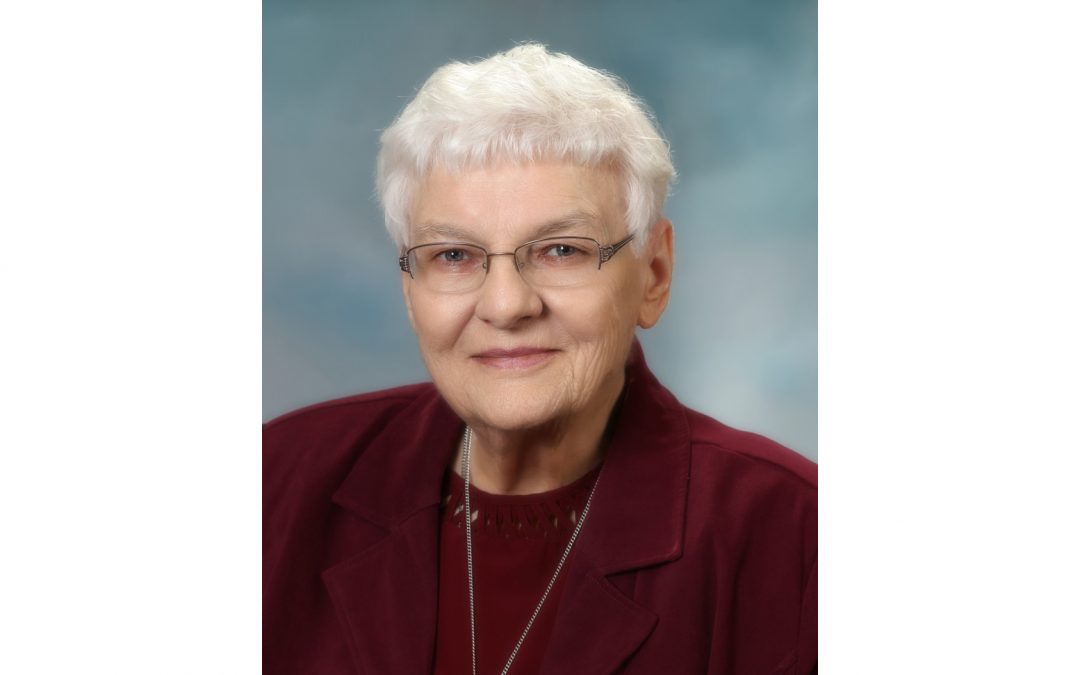 “Love of [humanity] should be exceeded only by love of God. One can better love [their] neighbor if [they] know them (through history).” – Sister Rose Dolores

Sister Rose Dolores Hoffelmeyer was known as a life-long learner, an avid reader, and a strong advocate for social justice. Though kind, she had a scholarly bent and valued accuracy and precision. She enjoyed young people, cooking spicy food, and facing new challenges. Her keen interest in history arose from her love of neighbor. She epitomized the scriptural commandment to love God and to love neighbor. She once explained that we can best love our neighbor by knowing them through their history. For her, history and the social sciences stood alongside, if just under, theology. Sister, 91, transitioned to eternal rest on June 12, 2020, in Ross Hall at the Motherhouse. She was an SCL for 71 years. She entered the SCL Community on Aug. 19, 1948 and professed vows as Sister Rose Dolores on March 15, 1956.

Shirley Therese was born on Dec. 6, 1928 in St. Joseph, Mo., the youngest of seven children of Frederick A. and Dominica (Kemmerling) Hoffelmeyer. A strong German Catholic heritage predominated on both sides of her family. She grew up with a religious inclination and an interest in foreign missions. As a teenager, she promised Blessed Mary that she’d become a Sister if her father would undergo conversion which he soon did. She attended St. Francis Xavier Grade School, Convent of the Sacred Heart Academy High School, and St. Joseph Junior College, all in St. Joseph, Mo., before pursuing an elementary education degree at Saint Mary College, Leavenworth. She completed her bachelor’s degree in 1957 and eventually earned a master’s degree in education in 1963. She continued to pursue post-graduate education in several schools across the United States, primarily studying history during her summer months.

She taught in grade schools for 12 years in Missouri, Kansas, and Montana, and then transitioned to teaching American literature and social studies to high school students for 19 years in the same three states. In 1974, She served for six years in leadership as an SCL Community Councilor. She also served on several hospital boards. In 1980, Sister returned to secondary education to teach American history and government.

In 1987, she entered Maryknoll Language School to develop her Spanish-speaking skills and prepare for service in South America, finally fulfilling a childhood dream. An assignment in Peru became the focal point of her life and led to some of her most significant work. For 10 years, she labored alongside the Peruvian people in small remote villages that struggled against poverty and lacked basic necessities. Sister Rose Dolores met these challenges through education, religious instruction, improved health care, and spiritual support. Her commitment to social justice brought dignity to Peruvian women, enabling them to find self-respect in a male-dominated culture. Similar efforts to educate indigenous young women entering the SCL community prompted her to undertake her greatest task, the writing of the community history of the Sisters of Charity in Latin America. The 650-page account, We Heard the Call, was published in 2005. It was a labor of love. Remarking on her time in Peru, she once said, “I have been touched by the simple faith and generosity of the people.”

Later in life, Sister Rose Dolores continued to support the cause of social justice and often volunteered at the Lansing Correctional facility.

Preceding Sister Rose Dolores in death were her parents and her six siblings, including five sisters, Francis Daffron, Anna Hoffelmeyer, Claire Hoffelmeyer, Bernice Keller, Leona Bodde, and one brother, Frederick Hofflemeyer. Survivors include several nieces and a nephew, and the SCL Community.