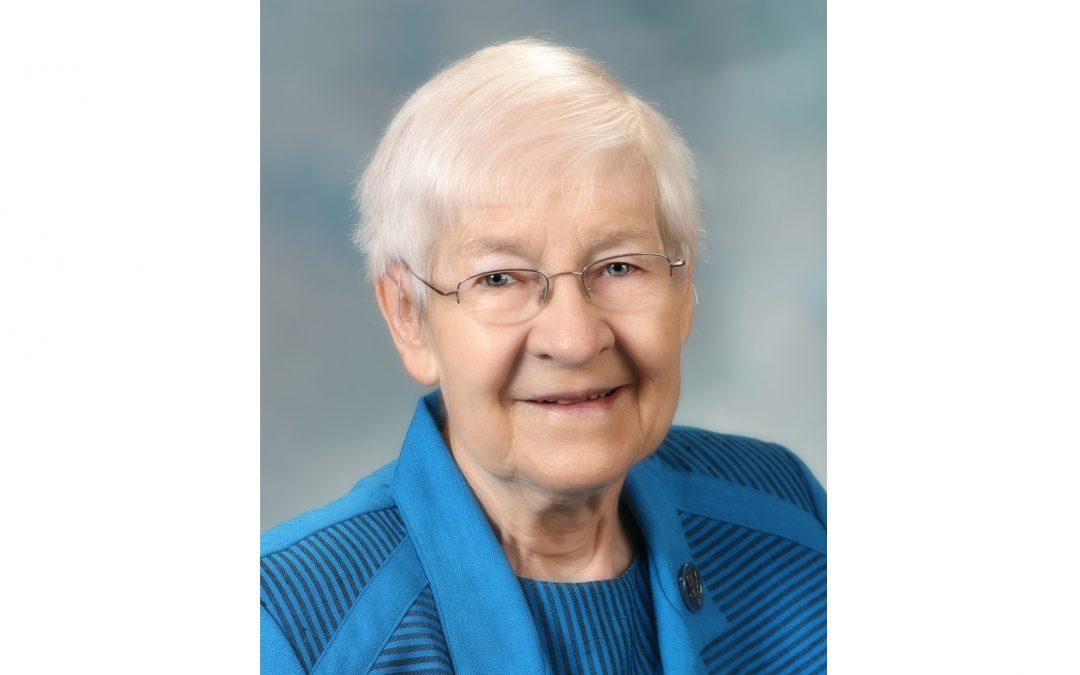 “Dear Jesus, help me to spread Thy fragrance everywhere I go. Flood my soul with Thy spirit and life.” – Cardinal John Henry Newman

Sister Marie Brinkman was known as a polymath with immense curiosity. She was highly industrious and often had several projects going on at once. As a long-time educator, she was the pillar of the English department at Saint Mary College (now the University of Saint Mary). She had a magnetic way of pulling people into her orbit. She invited students to share in her interests and academic enthusiasms, and then mentored them to find their own calling. Often the mentoring was life-long, as attested by the testimony of a former student in a recent article published in the Los Angeles Times. She embodied the SCL characteristic virtues of simplicity, humility and charity. Sister, 94, transitioned to eternal rest on June 17, 2020 in Ross Hall at the Motherhouse. She was an SCL for 71 years, entering the Community on Aug. 19, 1948. She professed vows as Sister Mary Leonilla on August 15, 1956.

Marie Leonette was born on May 22, 1926 in Emporia, Kan., the oldest and only girl of five children of Leo J. and Mae (Herrington) Brinkman. She had a strong German Catholic heritage, though her mother’s ancestors were from Northern Ireland. She had unusual agility with words and regularly poured over her hometown newspaper as a young child. She attended Sacred Heart Grade School and High School in Emporia, Kan., before pursuing an English degree at Saint Mary College, Leavenworth. In 1958, she received a Master’s degree in Education from Saint Mary, and later started Ph.D. studies in English at the University of Wisconsin, which she completed in 1968.

Sister Marie taught in high school for 13 years in Missouri, Kansas and Montana, before transitioning to Saint Mary College as an English instructor in 1963. She stayed at the college for the next 38 years, achieving the rank of full professor in 1976. She soon became the chairman of the English department, and was named the McGilley Chair of English and Liberal Arts in 1996. She taught until her retirement in 2001, and was strongly involved the Kansas Humanities Council for much of her college career. In gratitude for her years of service, she was designated Professor Emerita of English at the college, and then transitioned to the role of SCL Community Historian. She spent the next several years researching and writing the SCL Community history, “Emerging Frontiers,” which provided a narrative account of the Sisters of Charity of Leavenworth from 1955 to 2005. The 510-page book was published in 2008, and took pains to document how modern reforms from Vatican II impacted the work of the SCL community, as well as efforts to redefine itself as it entered a new century.

In 1988, Sister Marie took a sabbatical to England to do research on Cardinal John Henry Newman, the great 19th century English convert to Catholic faith, whom she greatly esteemed. His famous motto was, “Heart speaks to heart.” The phrase has several meanings, but describes a form of charity where a person leads another to God through love and kindness. Next to grace, Newman believed the greatest influence one person can have over another is through goodness. Sister Marie possessed this quality to overflowing. She epitomized a line from Newman’s famous prayer, “Radiating Christ”: “Help me to spread thy fragrance everywhere I go.”

In her retirement years, Sister Marie taught evening college courses to prisoners at the Lansing Correctional Facility, and gave attention to social justice pursuits and other writing projects. Her winsomeness won the hearts of prisoners too.

Preceding Sister Marie in death were her parents and three of her four brothers, including Father John V. Brinkman, OFM, James Brinkman, and Philip Brinkman. Survivors include her brother, Michael Brinkman, and several nieces, nephews, and cousins, and the SCL Community.