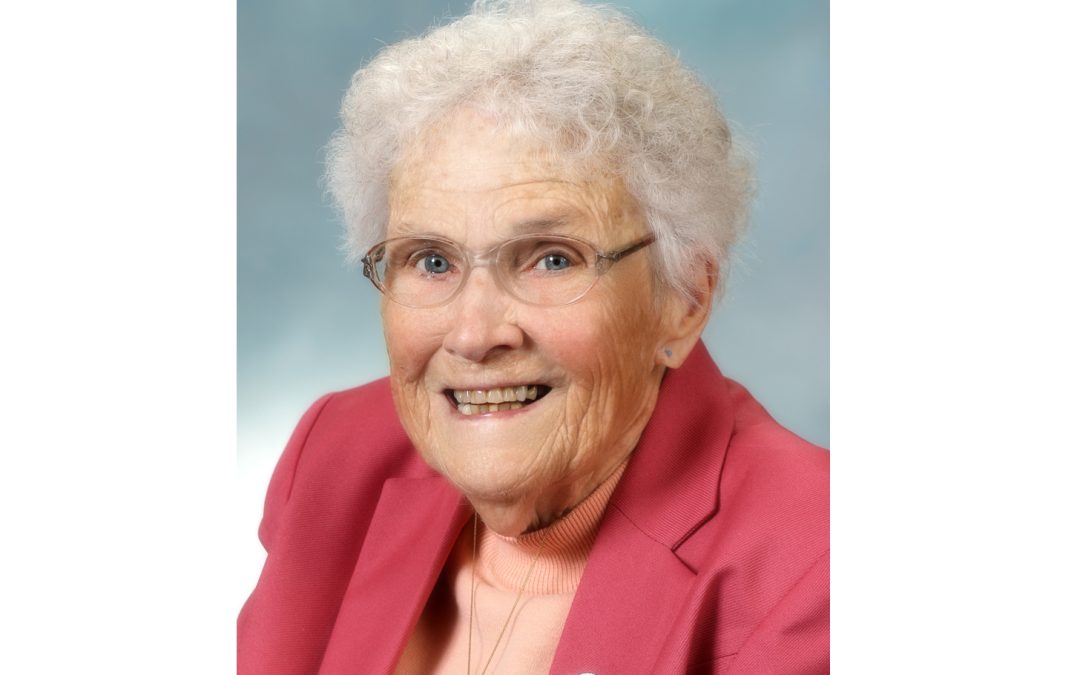 “Well done good and faithful servant…enter into the joy of your master.”
– Matthew 25:23

Sister Margaret Mary “Peg” Driscoll, SCL . . . Sister Peg Driscoll, 92, a Sister of Charity of Leavenworth (SCL) for 74 years, died on Nov. 23, 2021, in Ross Hall at the SCL Mother House in Leavenworth, Kan. Margaret Mary Driscoll was born on Feb. 3, 1929, in Brooklyn, N.Y., the last of four children of William and Helen (Hartnett) Driscoll. She graduated from St. Catherine of Genoa Grade School and St. Agnes Seminary (high school) in Brooklyn, N.Y. Her mother decided the 17-year-old Irish Brooklynite would head “out west” for college. She entered the SCL Community on Feb. 12, 1947, and professed vows as Sister Marie Dominic on Feb. 15, 1949, and later returned to her baptismal name. In 1963, she received a B.S. in elementary education from Saint Mary College, Leavenworth, Kan.

Sister Peg once remarked that her early years in Kansas were an adjustment, with language being a “primary barrier.” Her Brooklyn accent was hard for Midwesterners to understand, so she worked diligently on phonetics to be a better communicator. She sometimes joked that “Brooklynese” still slipped into her conversations. Ironically, over the course of her entire ministry, Sister Peg used her voice to be a tireless advocate for the needy, the disadvantaged, and the powerless. She sought to live out Jesus’ admonition to care for “the least of these,” and to live a life of prayer.

For 20 years, Sister Peg served as a capable teacher and school administrator in Kansas, Colorado, Montana, California, Wyoming, and Missouri. Her kind blue eyes, caring spirit, and quick wit endeared her to students, faculty, and parents, as did her hard work.

In 1969, her deep concern for children prompted a new career direction: social work. She started out as a deputy juvenile officer for Jackson County Courts in Kansas City, Mo., and was soon made director of nearby Hilltop School for Girls. In 1974, her growing love of advocacy work and social concern led to a master’s degree in social work from Rutgers University in New Brunswick, N.J. She then dedicated the next 39 years to a wide range of social services benefitting infants, children, and adults. Much of her work focused on adoption services, child welfare, foster care, emergency assistance, and criminal justice (working with victims and offenders).

Her work for 6 years as administrator for McCune Home for Boys in Kansas City, Mo., was recognized by an official proclamation from a Jackson County official who commended her for her leadership, integrity, and sense of fairness. Sister Peg later said her days at McCune were among the “most satisfying” of her religious service. In 1995, Sister Peg was nominated for a Kansas City Spirit Award for her work as associate director of Catholic Social Services and her efforts as a therapeutic foster parent for two special needs children. The nomination letter ended by saying, “Her influence within our community will live on for years to come.”

A highlight of Sister Peg’s ministry was establishing Ancilla Place, which cared for children needing adoption. Mother Mary Ancilla Spoor was an early mentor who strongly encouraged Sister Peg’s interest in social work–something she appreciated and never forgot. In her advocacy efforts, Sister Peg emphasized the importance of extending dignity and respect to those needing help. She often said that when people come for needed services, “We must act as if Christ himself were coming through the door.”

Later in life, Sister Peg found new ways to minister, even involving her beloved golden retriever, Elisha. They got involved in Pets for Life, a program that trains therapy animals to serve in facilities across Kansas City. Both were profiled in a 2002 Kansas City Star article about service animals helping hospital patients, nursing home residents, and victims of abuse.

In her retirement years, Sister Peg volunteered at Providence Medical Center in Kansas City, Kan., and spent time with family, whom she cherished. She accompanied her nieces on trips, and graced them with her stories. Being Irish, she was a natural and gifted storyteller. As one person said, “She was like a grandmother to everyone.” Later in life, Sister Peg expressed gratitude to the SCL Community and others for their support: “I have through the years realized my contentedness, my potential, my challenges, my rewards with you, my Sisters, my Kansas family, and friends.”

Preceding Sister Peg in death were her parents and three siblings, including one brother, Timothy Joseph Driscoll; and two sisters, Joan Williams and Helen Pfeiffer. Survivors include 2 nephews and 7 nieces, as well as numerous grandnephews and grandnieces, and the SCL Community.