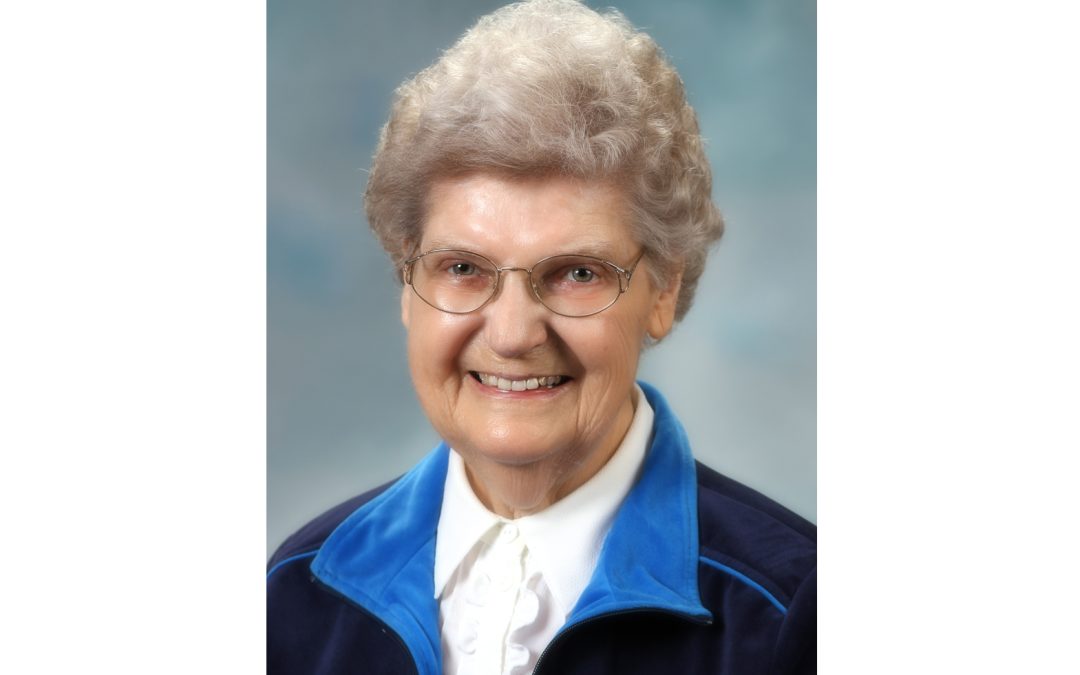 “I love the Lord. He’s been with me on my journey throughout my life. It’s been a good journey.”
– Sister Irene Hanley

Irene V. Hanley was born March 11, 1932, in Greeley, Neb., the eleventh of fourteen children of John and Mary (Ryan) Hanley. She graduated from St. Lawrence Grade School and Girls Central High School in Butte, Mont. In 1966, she received a B.S. in elementary education from Saint Mary College, Leavenworth, Kan.

She entered the SCL Community on Aug. 18, 1950, and professed vows as Sister Jean Mary on Aug. 15, 1952, and later returned to her baptismal name. She sometimes joked she had a “cradle vocation” due to her desire to be an SCL since first grade.

Sister Irene loved being an elementary teacher and served for 28 years in schools in Wyoming, Montana, Colorado, Kansas, Oklahoma, and Illinois. Her quick smile and hearty laugh made her a hit with students.

During later summers, she took coursework in Clinical Pastoral Education (CPE) and was accepted into a program at St. Joseph Hospital in Albuquerque, N.M. After certification, she served 10 years as a chaplain in De Paul Hospital in Cheyenne, Wyo. A hospital newsletter commented that she knew every employee by name, and went out of her way to help those in need. She found chaplaincy work rewarding—a way to minister to body and spirit, as well as prepare people for death and the afterlife. In 1988, she was recognized as employee of the year.

Later, she worked for 7 years as the director of pastoral care at Providence Medical Center in Kansas City, Kan. Her availability, concern, and empathy endeared her to many.

In 2000, Sister Irene returned to the Mother House to serve as assistant coordinator for 7 years. Her teaching and pastoral care skills aided her work, and she felt enriched by the companionship of her fellow Sisters. Along with her administrative gifts, she was famous for her homemade “pasties”—a baked pastry filled with steak, potatoes, and other ingredients, which was a long-time family recipe. One year, she honored the Sisters by featuring her expertly-made pasties at the St. Patrick’s Day meal.

In her retirement years, she devoted herself to family, and loved to spend time with her nieces and nephews, whom she often sent cards or phoned. She took pains to make sure everyone had the latest contact information. She loved to play cards or bingo with family, or go on outings, where she sometimes shared her faith, or her pride in being Irish.

A vigil will be held at 7:00 p.m. on Monday, Nov. 22, in Ross Chapel, SCL Mother House, Leavenworth. Mass of Christian Burial will be celebrated in Ross Chapel at 10:30 a.m. on Tuesday, Nov. 23. Interment will follow in Mount Olivet Cemetery, Mother House grounds. Due to COVID-19 restrictions, attendance is restricted to family and invited guests only. Memorial contributions may be made to the Sisters of Charity of Leavenworth, 4200 S. 4th Street, Leavenworth, Kan. 66048. Arrangements made by R.L. Leintz Funeral Home, Leavenworth.