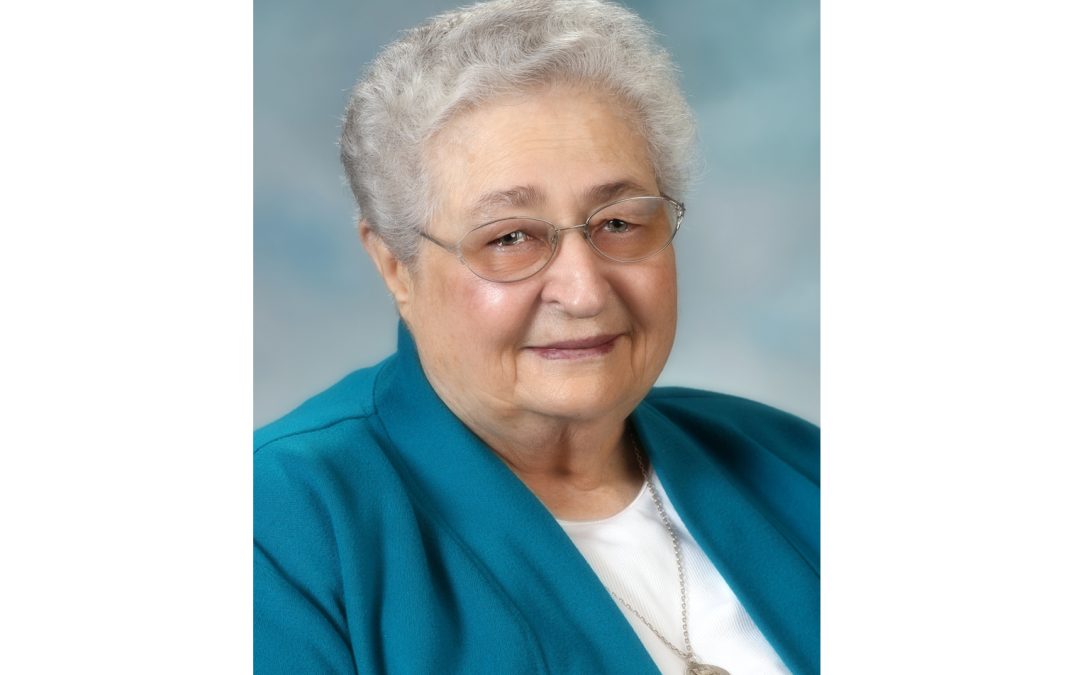 “God puts rainbows in the clouds so that each of us –
in the dreariest and most dreaded moments –
can see a possibility of hope.”  – Maya Angelou

Victoria M. Friday was born on Nov. 9, 1933, in Kansas City, Kan., the oldest of five children of Victor and Gladys (O’Such) Friday. She graduated from St. Stephen’s Academy (grade school) and St. Aloysius Academy (middle and high school) in Kansas City, Mo. At St. Stephen’s, she was first introduced to SCL Sisters, who had a deep influence on her life.

Sister Mark devoted her life to Catholic education. She served as a teacher and administrator for 48 years in schools in Colorado, Montana, Wyoming, Oklahoma, Kansas, and Missouri. She was especially proud of her 29 years of service to the Archdiocese of Kansas City in Kansas, where she served largely as a teacher, assistant principal, vice-principal, and religion coordinator for St. Ann School in Prairie Village, Kan.

For Sister Mark, educating students was a life passion. Her educational philosophy was captured in a simple phrase: “If you are a good edu-carer, you will be a good educator.” This caring spirit and her steadying influence helped St. Louis Grade School in Kanas City, Mo., cope with the tension of racial integration during the turbulent 1960s.

Sister Mark’s ability to respond in the midst of crisis was tested outside the classroom too. On June 8, 1966, a devastating tornado landed near Sacred Heart School in Topeka, Kan., where Sister Mark served. She scrambled from the school’s basement, still shaking off broken glass, to help survivors. The storm, which demolished many neighborhood homes, left debris everywhere. For the next twelve days, area residents recalled the sight of a nun in a blue-checkered apron and mud-caked tennis shoes going from family to family to provide assistance and help direct relief efforts. Besides working with the Red Cross, Sister Mark recruited local teenagers, armed with shovels and other tools, to help families recover needed lost items. Her self-sacrifice, charity, and caring spirit made her a neighborhood legend.

After her retirement, Sister enjoyed spending time with family and using her teaching gifts where needed. She kept a card from her Silver Jubilee Celebration, marking her 25-year anniversary as an SCL, which she celebrated in 1977. The card contains a quote from Cardinal John Henry Newman, part of which could sum up Sister Mark’s life as an SCL: “I am a link in a chain, a bond of connection between persons. He has not created me for naught. I shall do good. I shall do his work.”

Preceding Sister Mark in death were her parents and one sibling, Caroline Poje. Survivors include one sister, Pat Vochatzer, and two brothers, John Friday and William Friday. She is also survived by nieces and nephews and the SCL Community.

A vigil will be held at 7:00 p.m. on Thursday, Dec. 9, in Ross Chapel, SCL Mother House, Leavenworth. Mass of Christian Burial will be celebrated in Ross Chapel at 10:30 a.m. on Friday, Dec. 10. Interment will follow in Mount Olivet Cemetery, Mother House grounds. Due to COVID-19 restrictions, attendance is restricted to family and invited guests only. Memorial contributions may be made to the Sisters of Charity of Leavenworth, 4200 S. 4th Street, Leavenworth, Kan. 66048. Arrangements were made by Belden-Larkin Funeral Home, Leavenworth.