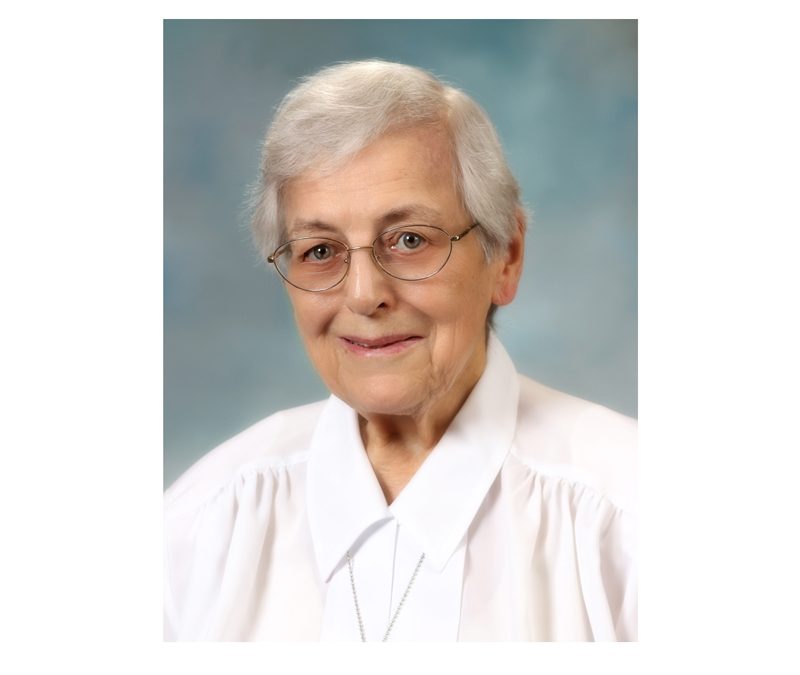 Commit your works to the Lord and your plans will be established. – Proverbs 16:3

Sister Mary Willoughby, 94, a Sister of Charity of Leavenworth (SCL) for 75 years, died on Dec. 31, 2021, in Ross Hall at the SCL Mother House in Leavenworth, Kan. Lois Jean Willoughby was born on April 27, 1927, in Grand Rapids, Mich., the adopted child of George and Mary (Morell) Willoughby. At age 5, she started piano lessons, which led to a life-long interest in music. She graduated from Fratt Memorial Grade School and Billings Senior High School in Billings, Mont. In Billings, she took clarinet lessons from Sister Mary Ita O’Brien, an SCL, and joined her school orchestra. She added the bass violin, oboe, and other instruments.

She entered the SCL Community on Aug. 14, 1946, and professed vows as Sister Maris Stella on Aug. 15, 1948, before changing to Sister Mary Willoughby. In 1963, she received a B.S. in elementary education from Saint Mary College, Leavenworth, Kan. Two years later, she received a B.S. in music education from New Mexico Highlands University in Las Vegas, N.M.

For 23 years, Sister Mary served as a music teacher in schools in Kansas, Nebraska, Wyoming, Montana, and California. She taught all levels of instrumental and classroom music, as well as band, orchestra, chorus, and piano. Students were impressed by her spirituality and energetic enthusiasm. During her years in Montana, she started a music therapy program at Warm Spring State Hospital. She once said, “Teaching music and seeing how much music means to people who hear it is among my greatest rewards.”

In 1974, she embarked on a new ministry focus: coding medical records at St. John’s Hospital in Santa Monica, Calif. She stayed in this assignment for 20 years. Co-workers were impressed with her ability to classify and obtain missing information in patient records.
In 1994, she continued to expand her ministry by serving for two years as elder ministry coordinator at St. Laurence O’Toole parish in Laramie, Wyoming. At her leaving, Father Ray Moss, an assistant pastor at the parish, wrote that Sister Mary had the gift of “renewing hope” and that her concern and love for she those she served had “forged deep bonds of friendship.” During this time, she received a certification in the gerontology program at Saint Mary-of-the-Woods College in Indiana.

In 1996, she returned to the Mother House and continued her love of working with the elderly at Medicalodge of Leavenworth. She won distinction as employee of the month. Her director once commented, “I wish I had five more Sister Mary’s around here.” It seemed that all her skills, interests, and abilities coalesced around her love for the elderly. She became a hospice volunteer. Her music and ministry skills were a comfort to the dying, as she helped them journey to the next life. As she once humorously noted, “My favorite people are seniors, of which I am one.”

A highlight of Sister Mary’s final year was commemorating 75 years as an SCL with other Mother House and Ross Hall Sisters during the Community’s Jubilee celebration. A quote she valued summed up her life: “God is ready to assume full responsibility for the life wholly yielded to him.”

Preceding Sister Mary in death were her parents. Survivors include the SCL Community.