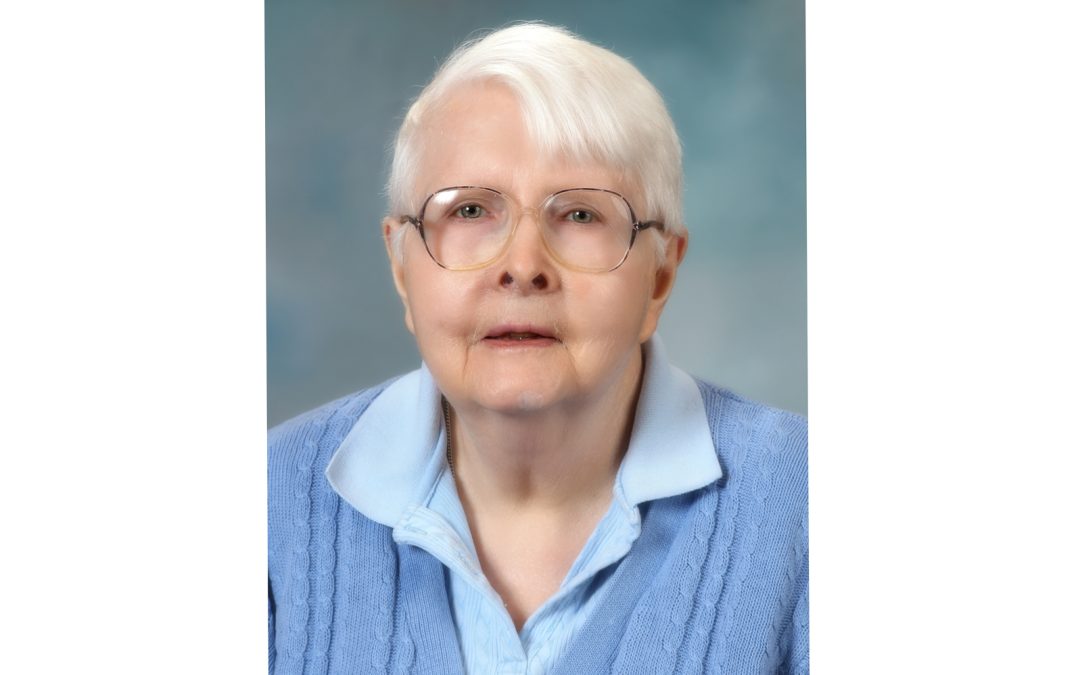 Helen Schram was born on Oct.15, 1925, in Cheyenne Wells, Colo., the second of five children of John and Eleanora (Rothemeyer) Schram. She grew up in a strong German Catholic family. Childhood memories of the dust bowl in the 1930s, which strongly affected eastern Colorado, never left her. A 1932 storm left 2 inches of dust over everything in her family’s home and farm. She graduated from Sacred Heart Grade School and Cheyenne County High School in Cheyenne Wells.

Sister Mary Eleanor loved nursing and served for over 30 years in hospitals in Montana, Kansas, Colorado, and New Mexico. She developed specialties in several areas of care: obstetrics, ICU, surgery, and emergency room. Over her career, she welcomed newborn babies, as well as comforted the dying in their last hours. Her gentleness, compassion, and generous nature contributed to all phases of her work.

In 1980, she took time to care for her dying 90-year-old mother in Papillion, Neb. Their months together were among the most precious in Sister’s life. After this, she went back to the Mother House in Leavenworth, Kan., to serve as a nurse in Ross Hall.

In her later years, Sister Mary Eleanor worked for 19 years as a clerk for the post office at the University of Saint Mary (then Saint Mary College). Her quiet spirit took special delight when students received care packages from home. Her dependability, kindness, and accuracy were highlighted during a 2006 appreciation ceremony in her last year at the post office. In her retirement years, she focused on a ministry of prayer.

Preceding Sister Mary Eleanor in death were her parents and two siblings, George Schram and Josephine Schram. Survivors include two sisters, Rita Ramm and Margaret Pfeifer. She is also survived by many nieces and nephews and numerous grandnieces and grandnephews, and the SCL Community.

A vigil will be held at 7:00 p.m. on Monday, Dec. 6, in Ross Chapel, SCL Mother House, Leavenworth. Mass of Christian Burial will be celebrated in Ross Chapel at 10:30 a.m. on Tuesday, Dec. 7. Interment will follow in Mount Olivet Cemetery, Mother House grounds. Due to COVID-19 restrictions, attendance is restricted to family and invited guests only. Memorial contributions may be made to the Sisters of Charity of Leavenworth, 4200 S. 4th Street, Leavenworth, Kan. 66048. Arrangements made by R. L. Leintz Home, Leavenworth.