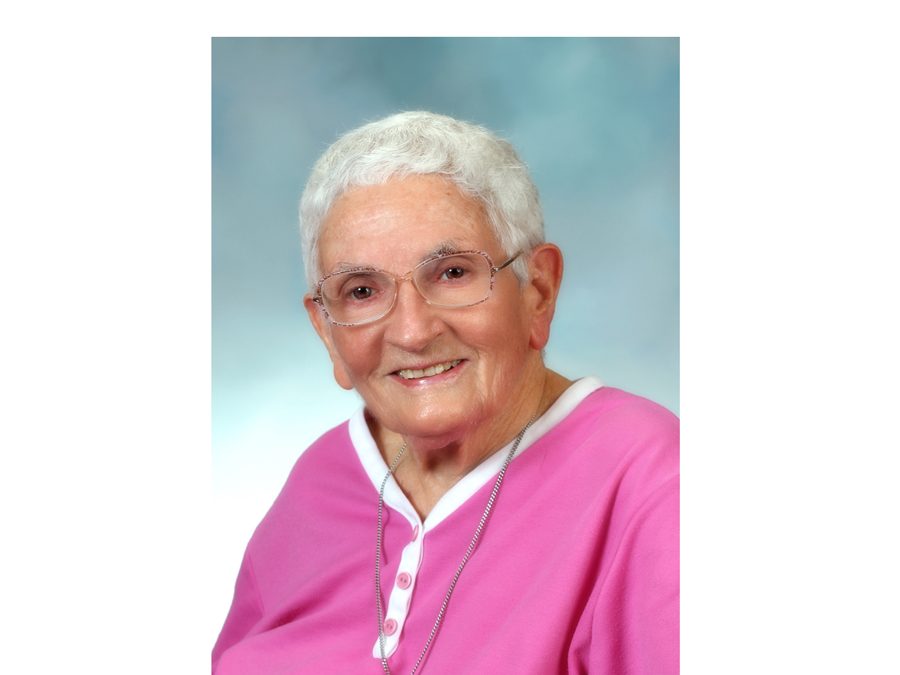 “I sit back and bask in the warmth of deep memories of places, events, and people who have shaped me. The Lord has guided every step in my life’s journey.” – Sister Mary Bridget Mullen

Sister Mary Bridget, 94, a Sister of Charity of Leavenworth (SCL), died on June 30, 2021, in Ross Hall at the SCL Mother House, Leavenworth, Kan. She celebrated her 70th anniversary as an SCL in 2016.

Sister entered the religious community soon after high school and served as a long-time teacher in primary and secondary schools, before working in healthcare at the end of her ministry. Though tiny, she had a mighty presence, loved animals and the outdoors, and was known for her quick wit, sense of humor, and disarming nature. She had a genuine and natural rapport with students, who valued and trusted her. Sister Mary Bridget embodied the SCL characteristic virtues of simplicity, humility, and charity.

Helen Therese Mullen was born on Nov. 16, 1926, in Butte, Mont., the fourth of five children of Michael J. Mullen and Nellie (Sullivan) Mullen. She had a strong Irish Catholic heritage on both sides of her family, and spoke with a “Butte brogue.” While her parents stressed education, which she took to heart, she also excelled in sports and music (piano), and was known for her mischievousness. Once, when her adored, oldest sister expectantly opened the front door to greet a date, she was met by Helen and her brother, who doused her with water.

She attended St. John’s Grade School and Girls Central High School in Butte, Mont., before pursuing an education degree at Saint Mary College, Leavenworth. Helen entered the SCL Community on Aug. 14, 1946, and professed vows as Sister Mary Bridget on Aug. 15, 1948. In 1970, she received a master’s degree in history from Loyola University in Chicago.

Sister Mary Bridget served in primary and secondary schools for almost 40 years in Missouri, Montana, Nebraska, and Kansas. She taught a wide variety of subjects (English, history, psychology, religion, and more), and also coached team sports and sponsored the cheerleading squad. During her teaching career, she once remarked that there are two types of people: “those who are present, but their minds are elsewhere,” and those who are not only present, but whose “presence remains long after they are gone.” She said, “I prefer to be the latter”—and she was. She was spiritually present and took time to help students deal with problems that sometimes went beyond the classroom. She taught high school during the Vietnam era and agonized over those students—corresponding with many who saw action and some of whom gave their lives in service to their country.

Sister Mary Bridget was a life-long learner who spent several summers working to deepen her knowledge of history through various educational opportunities. One summer, she walked the battlefields of the American Revolution, later bringing that experience back to the classroom. She was always looking for ways to make history and other subjects come alive for her students. After leaving education, Sister worked for three years in medical records at DePaul Hospital in Cheyenne, Wyo., and also served with the SCL Health Program.

In her retirement years, Sister Mary Bridget spent time caring for the elderly, as well as several orphaned cats who lived near the Mother House. She loved spending time with family—something that was always important to her—and kept up with her 14 nieces and nephews—never forgetting to send birthday greetings to each one. She also stayed connected to the University of Saint Mary, her alma mater, and visited with students and cheered the school’s athletic teams. Reflecting on her life as a Sister, she once remarked, “I sit back and bask in the warmth of deep memories of places, events, and people who have shaped me. The Lord has guided me every step in my life’s journey.” Even though she sometimes commented humorously that God was a “rascal,” she knew that all of life was an illustration of divine love.

Preceding Sister Mary Bridget in death were her parents and three of her four siblings, including Joseph T. Mullen, Betty Mullen Daly, and Rosaleen Mullen; and one niece, Joan Daly. Survivors include her oldest sister, Margaret Mullen Presley, and 14 nieces and nephews, and the SCL Community.

A vigil will be held at 7:00 p.m. on Thursday, July 22, in Ross Chapel, SCL Mother House, Leavenworth. Mass of Christian Burial will be celebrated in Ross Chapel at 10:30 a.m. on Friday, July 23. Interment will follow in Mount Olivet Cemetery, Mother House grounds. Due to COVID-19 restrictions, attendance is restricted to only invited guests. Memorial contributions can be made to the Sisters of Charity of Leavenworth, 4200 S. 4th Street, Leavenworth, KS 66048. Arrangements made by Belden-Larkin Funeral Home, Leavenworth.