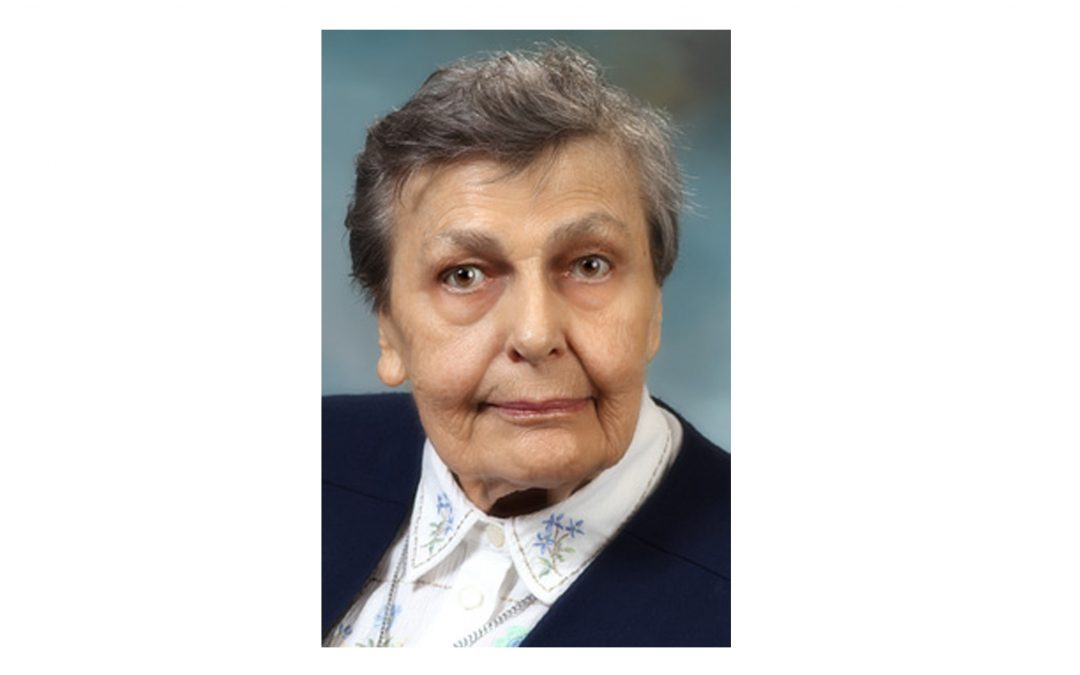 “You shall speak your words in foreign lands, and all will understand. You shall see the face of God and live.” —From the song, “Be not afraid,” by Bob Dufford, SJ

Sister Lucille Harrington was known for her love of nature, birdwatching, and animals. She felt that every part of creation revealed the glory of God, whether she was in her native Kanas or on the mountain ranges of South America where she ministered to the Aymara Indians. Sister, 88, transitioned to eternal rest on June 20, 2020 in Ross Hall at the Motherhouse. She was an SCL for 70 years, entering the Community on Aug. 18, 1949. She professed vows as Sister John Francis on Aug. 15, 1951, but later resumed her baptismal name.

Lucille Annette was born on July 17, 1931 in Leavenworth, Kan., and was one of six daughters of John F. and Mary (Schlonga) Harrington. She was proud to hail from the state’s oldest city. She attended Sacred Heart Grade School and Saint Mary Academy High School in Leavenworth, Kans., before eventually pursuing an elementary education degree at Saint Mary College, Leavenworth.

Sister Lucille taught in parochial schools for 14 years in Kansas, Missouri, Colorado, Montana, and Wyoming. After completing her bachelor’s degree in 1964, she started language preparation for work in South America in 1965. She went to Bolivia in 1966, and served for 20 years as a parish administrator, religious educator, and pastoral minister. She had a caring spirit and strove to be worthy of the SCL calling to serve where needed. She sometimes referred to this as being “Leaven-worthy.”

Sister Lucille arrived in the town of Coripata, Bolivia, just after Vatican II. She worked with other Sisters to establish a visible Catholic presence among the mountain people. With few priests nearby, she took on much of the evangelizing and catechetical work. She organized small groups that taught the basics of faith and the importance of prayer. The Aymara people grew spiritually, and this reassured them in the midst of poverty and struggle. She was instrumental in helping build a new parish church in the town, which extended the reach and depth of the growing congregation.

Her work in South America not only graced the lives of people, but also animals. One notable story recounts how she and a fellow Sister rescued a “prodigal puppy” from a trash heap. The dog was starved and dying, but they nursed him back to health over many weeks. Over the years, she would adopt and redeem many stray pets as part of her “unofficial” work for the Lord.

In her last dozen years of full-time service, she continued to work in pastoral ministry and religious education, while moving back and forth between Peru, Ecuador, and the United States. In 2000, she returned to the U.S. for good to serve at the Child Migrant Center in Palisade, Colo.

In her retirement years, she enthusiastically helped Mexican-Americans at Our Lady of Guadalupe Church in Topeka, Kan. Sister Lucille was never known as a complainer. She saw events as part of a larger divine plan. She cherished the hymn, “Be not afraid,” by Bob Dufford, SJ, and especially loved the stanza: “Be not afraid. I go before you always. Come, follow me, and I will give you rest.” Throughout her life and work, she always endeavored to rest comfortably and firmly in God’s grace and providential care.

Preceding Sister Lucille in death were her parents and five sisters, including Rosemary Givens, Helen Marks, Frances Leach, Florence Harrington, and Margaret Sickman. Survivors include nieces, a nephew, many extended family members, and the SCL Community.