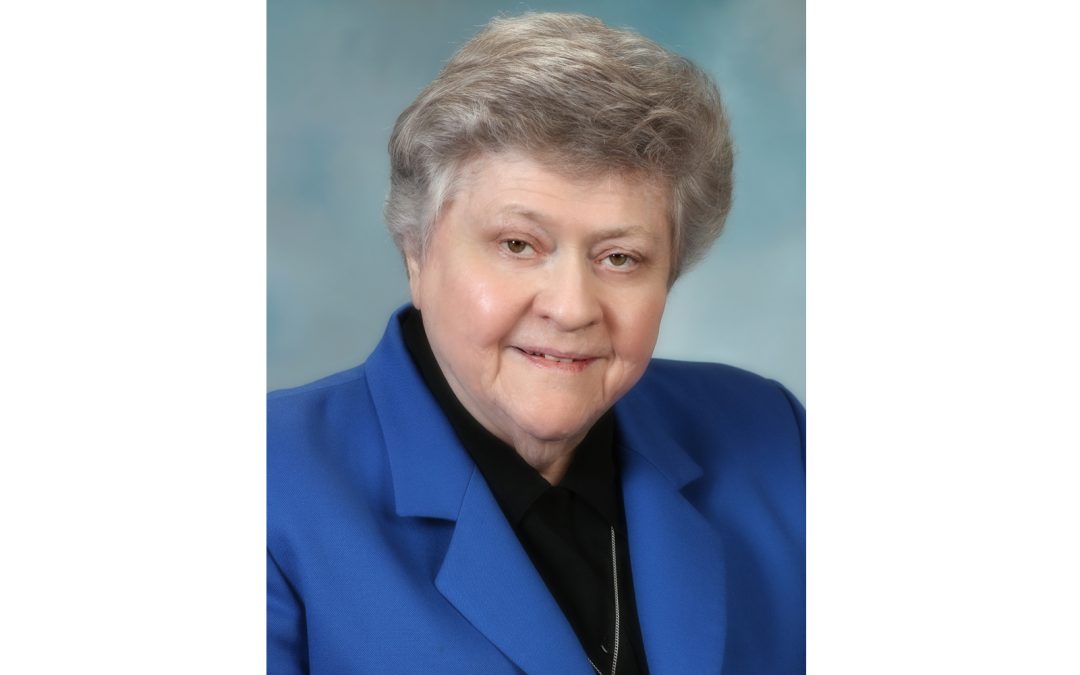 My flesh and my heart may fail, but God is the strength of my heart and my portion forever. Psalm 73:26

Sister Rita Smith, 81, a Sister of Charity of Leavenworth (SCL) for 63 years, died on May 15, 2022, in Ross Hall at the SCL Mother House in Leavenworth, Kan. A long-time educator and school administrator, Sister was proud of her Irish heritage, loved creating and teaching art, and spending time in Colorado, where she enjoyed fishing, hiking, and taking nature photography. Friends, family, and SCL Sisters remember her wonderful sense of humor, graciousness, and humility.

Rosemary Smith was born on October 20, 1940, in Kansas City, Mo., the second of four children of James and Sara Ann (Russell) Smith, both Irish Catholic immigrants. Rosemary and her two siblings (Rita Ann and John Francis) made history as the first set of triplets born at St. Mary’s Hospital. Sadly, John Francis died two days later of complications from pneumonia, but the two sisters remained close all their lives.

Rosemary graduated from St. Francis Xavier Grade School and Bishop Hogan High School in Kansas City. In high school, she first came into contact with SCLs, whom she regarded as “excellent educators.” She was strongly influenced by Sister Mary Ernest Marsh, who encouraged her to pursue art—a life-long passion. After high school, she enrolled at nearby Saint Teresa’s College (now Avila University) and was influenced by Sister Margaret Reinhart, CSJ, an art professor who taught her how to make frescoes.

She entered the SCL Community on Aug. 24, 1958, and professed vows as Sister Rita Francis on Sept. 2, 1962, in honor of her triplet siblings. In 1967, she received a B.A. in art and secondary education from Saint Mary College, Leavenworth, Kan. Ten years later, she completed a M.S. in secondary administration from Creighton University.

Sister Rita spent 32 years in education ministry, four in elementary schools, and 28 years as a teacher and administrator in high schools: St. Pius X, Bishop Hogan, and Bishop Ward in the Kansas City area, and Immaculata in Leavenworth, Kan. During her 8 years as principal at Immaculata, she was recognized in 1995 for her work with numerous military families with a “Commander’s Award for Public Service” from Fort Leavenworth Army Base.

She loved teaching and getting young people enthusiastic about art, teaching them about shades and contours, as well as introducing them to oils and watercolors—the latter remained her favorite medium. As an administrator, she was known as a strong leader who was especially sensitive to the needs of her staff.

In a Leavenworth Times article (Oct. 25, 1987), Sister Rita expressed her conviction that Catholic education made a difference in students’ lives, not only from academics, but by teaching the importance of service, and bringing “some kind of peace and caring to our world.”

In 1996, she became special assistant to the president of Saint Mary College, and later that year, served as an administrator at the SCL Mother House for the next 14 years, until her retirement in 2010. While at the Mother House, she helped the facility undergo several renovations. Sister Rita also offered watercolor classes for fellow Sisters, took photos of the SCL campus, and made decorative table settings, such as butterflies out of crepe paper, for holiday meals. She also gathered artwork from other Sisters, which she put on display. She cherished the opportunity to make the Mother House a special place for the Sisters and their friends and family.

Though in pain and bound to a wheelchair in her last years, nurses and friends were impressed with her generosity and graciousness. As she had during her ministry, Sister Rita always made a point to be present to others and make a contribution where she could. Her nieces and nephews remember how she made sure they had art supplies and other toys to play with, as well as her wit and penchant for corny jokes.

Preceding Sister Rita in death were her parents and two brothers, John Francis Smith and James Smith. Survivors include 1 sister, Rita Thompson, as well as 2 nephews and 3 nieces, and 13 grandnephews and grandnieces, and the SCL Community.