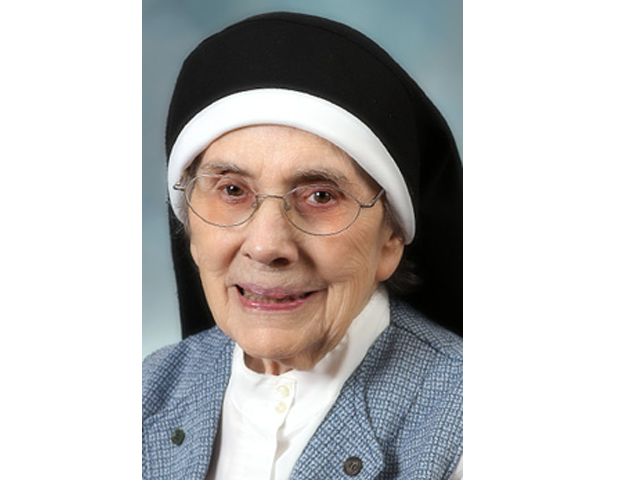 “Lord, teach us to know You, that knowing You we may love You, and follow You more closely.”
A prayer referenced in Sister Mary Lillian’s autobiography

Dedication to her religious vocation, commitment to the profession of nursing, and love of her family and heritage characterized the life of Sister Mary Lillian Landauer. Over the course of her 97 years, she made lasting friendships, maintained a cheerful disposition and cared for many patients. Sister Mary Lillian died on Jan. 6, 2018 in Ross Hall. She spent the majority of her 76 years as an SCL in the nursing profession.

Mary Regina (called Marie) was the third of 11 children and the first daughter of Joseph and Sophie Gilsinger Landauer. She was born in Ellis, Kan., on July 21, 1920. She spent her childhood in western Kansas. Due to drought, dust storms and grasshopper plagues, the family moved to the eastern part of the state. Marie recalled her childhood as poor, but rich with farm chores and good times with her siblings. She went to rural public schools and graduated from Tonganoxie High School. Much as she wanted to attend college, it was too expensive. So Marie worked a year. During this time, she began to consider a career in nursing. A helpful connection arranged her enrollment in the program at Saint Mary College.

Her mother encouraged Marie to attend Mass when she had the opportunity. As a college freshman, the young woman began to notice the Sisters in Annunciation Chapel and in the Saint Mary classrooms. Mid-semester, she made her first retreat and felt called to become an SCL. After internal debate and discussion, Marie was certain that this was her life direction. She knew becoming a Sister was what God was asking of her. Marie entered the SCL Community on June 15, 1941 and professed vows as Sister Mary Lillian on Dec. 19, 1942.

She served in a range of nursing specialties across SCL hospitals in Colorado, Kansas, Montana, New Mexico and Wyoming. She was a nurse or nurse supervisor throughout her active ministry except for two brief assignments as a hospital administrator. She considered her participation in the first national conference of operating room nurses one of the highlights of her life. Sister Mary Lillian remained grateful for the opportunity to care for patients, especially those who were poor and elderly in hospitals and nursing facilities. She concluded her health ministry at St. Joseph Home, Kansas City, Kan., and the SCL Mother House. She retired in 1993 and moved to Ross Hall in 2006.

“My life has been a very full, rich and rewarding experience,” she wrote.