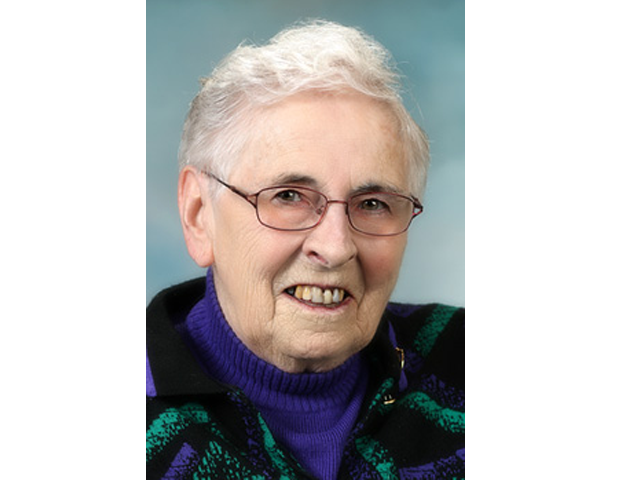 “This was a very different religious life than I had expected, but, in so many ways, what a wonderful life it has been …”
From Sister Pat’s Golden Jubilee remembrance, 2001

Faith, family, friends and caring concern for others were constants in the life of Sister Patricia Connolly, a Sister of Charity of Leavenworth (SCL) for 66 years. Sister Pat, 85, transitioned to eternal life on Feb. 5, 2018.

Her story began on Feb. 18, 1932 in Council Bluffs, Iowa, with her birth as the second of five children of Timothy and Anna White Connolly. As a child and teenager, Patricia pulled pranks and was spunky — traits attributed to her fun-loving Irish heritage. She rode horses — including one right into the kitchen of the family home! Her father thought boarding school might bring order into the high schooler’s life. Patricia reluctantly travelled to Leavenworth for her senior year at St. Mary’s Academy, but after a few weeks, she felt at home among new-found friends. After graduation, she had the “fire-desire” to join the SCL Community, but no one in her family took her seriously. She eventually convinced everyone that her vocation was real. However, Patricia delayed entry to the SCLs due to the untimely loss of her older brother who died in the Korean War. Patricia entered the novitiate on Aug. 21, 1951. She professed vows as Sister Anne Timothy on Aug. 22,1953 and later returned to her baptismal name.

Three distinct ministries occupied the greater portion of Sister Pat’s years as an SCL. With a degree in education from Saint Mary College, she taught grade school from 1953 through 1970 in Colorado, Illinois, Kansas and Montana. She next earned a degree in respiratory therapy, and worked and supervised in SCL hospitals in Santa Monica, Calif.; Kansas City, Kan.; and Leavenworth.

In 1977, family caregiving in Council Bluffs became her full-time ministry – for her parents, her brother and his wife, all of whom died in subsequent years. During this time, Sister Pat and her youngest brother assumed responsibilities for raising their 7-year-old niece. What Sister Pat expected to be a few months of caregiving turned into 22 plus years of the Lord’s new plan and new apostolate for her — including child-rearing. She considered this a blessed time and one for which she was grateful to the SCL Community.

Through the years, Sister Pat made friends easily. She was proud of her Irish heritage. Her family knew her as the general manager in charge of everyone, but they also recognized how very caring she was — to students in the classroom, patients in the hospital, her friends and relatives. Sister Pat returned to Leavenworth in 2000 and later served as transportation assistant for the Health and Wellness Office. She moved to the Mother House in 2011 and to Ross Hall in October 2015.