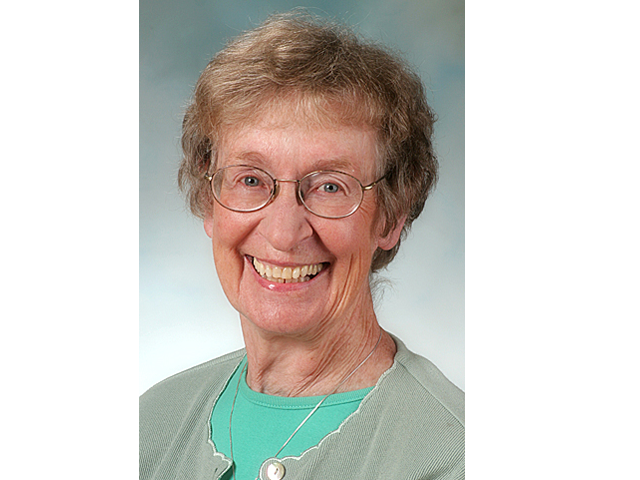 “May we always be joyful, pray continually and give thanks whatever happens … In everything give thanks.”
From Sister Lillian’s reflection, Golden Jubilee Mass, 2003

SCL, teacher, principal, pastoral minister, evangelizer, daughter, sister, aunt, friend — all roles that Sister Lillian Maguire embraced with her special talents and gifts. Sister Lillian, 83, died on Dec. 18, 2017 in Ross Hall. She was a Sister of Charity of Leavenworth (SCL) for 64 years.

Born on May 1, 1934 in Butte, Mont., Lillian Marie was the oldest of four daughters of Robert and Margaret “Sis” Kendrigan Maguire. Growing up in the Irish Catholic community, Lillian attended St. Lawrence Grade School, Walkerville, and Girls’ Central High School, Butte. Her family was always close to the SCLs. Lillian thought about becoming a Sister, but she also wanted to keep her options open. She attended Saint Mary College, Leavenworth, for a year, then decided to “Go South” to the Mother House, entering the SCL Community on Aug. 21, 1953. She professed vows as Sister Robert Mary on Aug. 22, 1955 and later returned to the name Lillian.

She loved teaching and taught for 11 years followed by 11 more as a principal, serving at schools in Kansas, Missouri, Montana and Wyoming. Sisters and students remember her as a capable and strong teacher and administrator. She was a mentor who fostered teacher creativity in the classroom.

In the post-Vatican II years, Sister Lillian was a pioneer in introducing adults to Catholicism through the Rite of Christian Initiation of Adults (RCIA). She enjoyed this role that combined pastoral ministry and teaching. She served in inner city parishes in Kansas City, Mo., and was part of a team that developed and published a practical RCIA workbook. These seasoned teachers learned together as they shaped the program and compiled the workbook from their experiences.

To enhance her background and education, Sister Lillian earned a master’s in theological studies from Catholic Theological Union, Chicago, and spent three months abroad in Jerusalem. She had earlier received bachelor’s and master’s degrees in education from Saint Mary College.

Sister Lillian continued to serve the Church through pastoral ministry, evangelization and the RCIA program. She worked in the Diocesan Center for Pastoral Life and Ministry in Kansas City, Mo., and in parishes. She returned to Montana in 1991 and served in similar ministries. In 2006, she joined the SCL retreat center team in Leavenworth. Her final active ministry took her home to Butte. In March 2011, Sister Lillian moved to the SCL Mother House and in September 2013 to Ross Hall.

She loved music, played the piano and had a great singing voice. In spite of challenges with her memory in recent years, she remembered the lyrics of many songs.

Preceding Sister Lillian in death were her parents and her sister Joan Maguire. Survivors include her sisters Roberta Connors Clowes, Glasgow, Mont., and Sheila O’Mara (John), Butte; nieces and nephews; and the SCL Community.