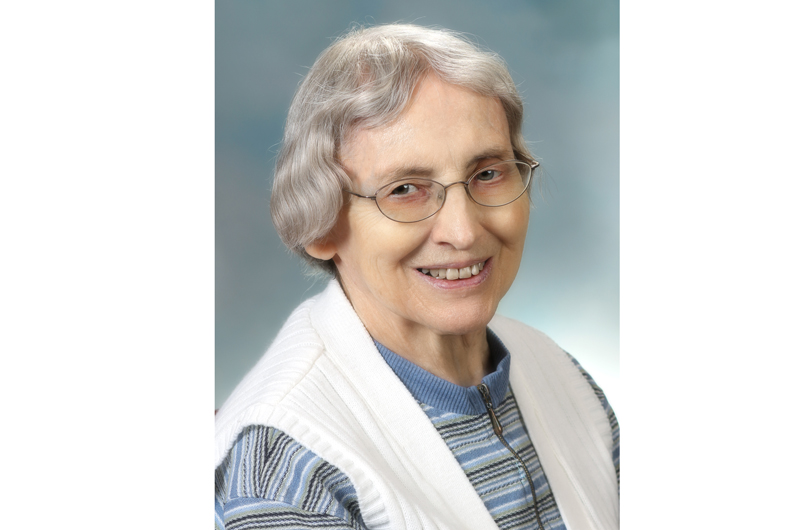 “I am grateful that somehow in the mystery of God’s providence, I was drawn to this Holy Ground…to become part of the SCL Community.”

In this reflection shared on her induction into the Saint Mary College Athletic Hall of Fame, Sister Madonna Fink also expressed gratitude for the Holy Ground of the entire Leaven-worth campus in all seasons — from ball diamonds to the cem-etery, which she called “one of the holiest places.” With her death on July 20, 2019, Sister Madonna will be laid to rest in this sacred space, joining the pioneer Sisters and other SCLs.

Madonna was born on May 25, 1932 in Sidney, Mont. She was the only child of Nora Mary Cahill and Lawrence Fink. She grew up on a farm where she developed her appreciation for nature. She attended a one-room grade school with her cousins, her closest childhood friends. Because her parents wanted her to obtain a Catholic high school education, Madonna went to Ursuline Academy in Great Falls, Mont. She enrolled in Saint Mary College, Leavenworth, with plans to major in Latin and become a teacher. Following her sophomore year, she responded to her vocational call and entered the SCL Community in 1952 — a decision she affirmed as the right one for life. She made vows on Aug. 22, 1954 as Sister Mary Laurita, and later returned to her baptismal name.

Sister was initially a grade school teacher. When she completed her bachelor’s degree in Latin and French at Saint Mary’s, she taught Latin in high schools in Kansas City, Mo.; Topeka, Kan.; Leavenworth; and Billings, Mont. Over summers, Sister Madonna earned a master’s in Latin through Creighton University, Omaha. As enrollment declined in Latin classes, she pursued and received a master’s in library science at Emporia State University, Emporia, Kan. She served one year as a librarian at Butte Central, Butte, Mont. In August 1978, Sister joined Saint Mary College as a reference librarian, a position she held until fall 2009 when she became a library volunteer. She called her contact with the college students one of the most rewarding experiences of her life.

While at Saint Mary’s, Sister Madonna assumed an additional role that endeared her to students, their families and the athletic department. She attended every home sporting event/game that she could and led teams in pre-game prayers. She baked cook-ies and gave them to student athletes for away games. Sister copied newspaper articles about athletes so they could share them with their families. A self-identified non-athlete, Sister Madonna was among the inaugural inductees into the Saint Mary College Athletic Hall of Fame in 1999. In 2005, the University of Saint Mary named its basketball court in her honor. She accepted this surprise recognition with joy, gratitude and her characteristic humility.

In addition to sports, Sister Madonna loved nature and enjoyed bird watching. She remained ever-grateful for the natural beauty of the Leavenworth campus. Sister took up residence at the Mother House in 2011 and transitioned to Ross Hall in 2015.
Sister Madonna’s parents preceded her in death. Survivors include her cousins and her SCL Community.