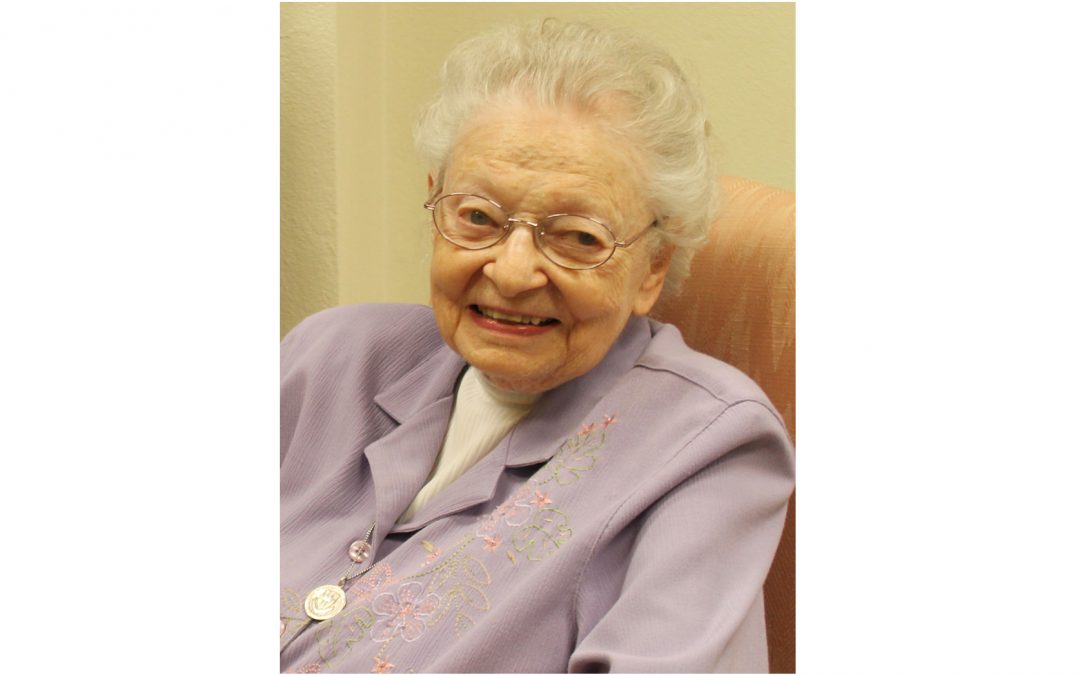 “Death is not putting out the light … It is turning off the lamp because the dawn has come.” – From a newsletter of KNOM Alaska Radio Mission

Reflective of her positive, upbeat outlook and her faith, Sister Mary Denise Sternitzke handwrote the above quote in her burial options paperwork. Sister’s new dawn came with her death the morning of Sept. 5, 2019 in Ross Hall. She was 97 years old and an SCL for 79 years — a play on numbers she must have appreciated.

Mary Jean was born in Sedalia, Mo., on May 26, 1922, the first of two children of W. Leo and Maurene Knapp Sternitzke. Her mother cultivated Mary Jean’s respect for the arts; her father, her love of mathematics. Mary Jean attended grade school and high school in Parsons, Kan. A trip to Saint Mary College and the SCL Mother House, Leavenworth, confirmed her interest in a religious vocation. Mary Jean joined the SCL Community on Sept. 1, 1940; she professed vows on March 2, 1942. She always thought this was where God wanted her to be.

For 56 years, Sister served in the classroom — six years as an elementary teacher; 38 across several high schools; and 12 at Saint Mary College. She particularly enjoyed working with teenagers and had a talent for teaching mathematics to those fearful of the discipline. She made it her mission to interest more women in this field. She received her bachelor’s in mathematics from Saint Mary College and was one course shy of a major in chemistry. She specialized in geometry for her master’s degree earned at Notre Dame University. Sister continued studies as the recipient of several National Science Foundation grants. With this background, she taught both mathematics and science courses.

Having never taken a business course, Sister Mary Denise took a leap of faith and made a ministry transition to become the bookkeeper at Marillac Clinic, Grand Junction, Colo. She wanted to be closer to working more directly with those who were poor. As was always characteristic of her, she jumped in to learn new skills and won the hearts of those around her. Sister worked and volunteered at the clinic from 1998 to 2014. In 2018, the clinic dedicated a new dental room in her honor. Sister Mary Denise retired to the SCL Mother House on Dec. 12, 2014 and relocated to Ross Hall on Oct. 23, 2015.

To her family, she remained a lifelong moral and spiritual compass. Her Sisters in Community recognized Sister Mary Denise for her keen mind, her love of mathematics and her eclectic interests. She was an avid sports fan, particularly of tennis tournaments and Notre Dame sports. In her later years, she strived to keep her mind busy by learning Russian and playing bridge, puzzles and games. She had a fondness for cats, two of whom she named after famous ballet dancers. Sister was witty and had a good sense of humor. She was prayerful and loved being part of the SCL Community.