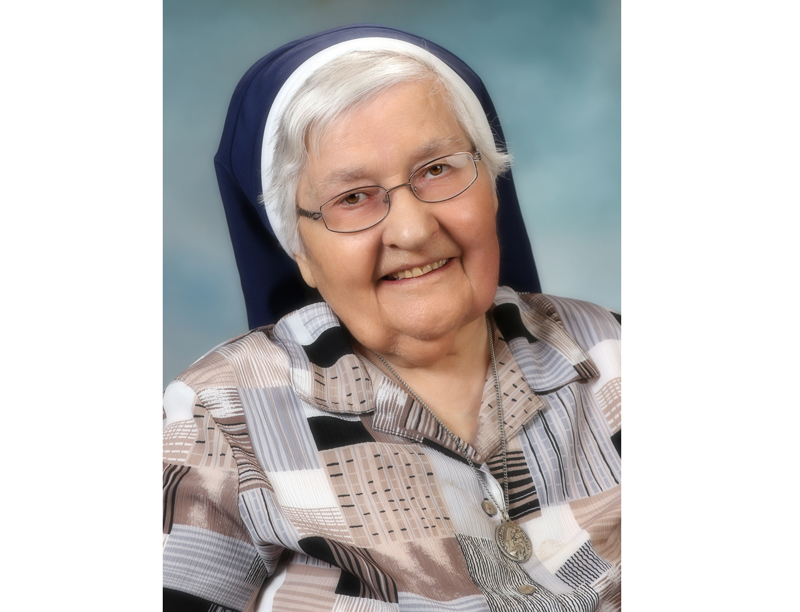 “I will see you again, and your hearts will rejoice, and no one will take your joy away from you.” —John 16:22

They were born on Feb. 26, 1929 in Nashua, Mont. Their mother died in childbirth. Seeking assistance to raise the children, their father placed the newborns and three older daughters in an orphanage. Albert and Elizabeth Doran Grimm adopted the twins. They attended schools in Bredette, Mont., and Fargo, N.D. They considered different religious communities and chose to apply to the Sisters of Charity of Leavenworth. When someone said they were too young to make this decision, the twins believed otherwise. With their parents’ approval and support, they entered the SCL Community in 1947 and made vows on Aug. 15, 1949. Catherine Rose took the name Sister Mary Emiline; she later returned to her baptismal name.

Sister Catherine Rose had hoped to serve in the field of nursing. Before realizing that opportunity, she taught first- to fourth-graders in elementary schools in Colorado, Montana and Nebraska for 15 years. She then completed studies at the St. Vincent School of Practical Nursing in Santa Fe, N.M. She was an LPN at SCL hospitals in Cheyenne, Wyo., and Grand Junction, Colo. While in Grand Junction, Sister sang and played the ukulele with the mariachi choir that performed in different parishes.

Returning to Leavenworth, Sister Catherine Rose completed her bachelor’s degree at Saint Mary College. She remained in nursing until 1989. At the former St. Joseph Home, Kansas City, Kan., Sister was known for the therapeutic skin care she provided, for her special skills, and for the good cheer she shared with residents. In her final LPN role, she served in the SCL infirmary. From 1989 until her retirement, Sister Catherine Rose worked in medical records and human resources at Saint John Hospital, Leavenworth, and in the Mother House transportation department. She moved to the Mother House in 1987 and transferred to Ross Hall in 2013.

With her twin, Sister Catherine Rose found great reward in volunteering at a food kitchen that served persons who were poor and homeless. Sister Catherine Rose played the guitar, was a wiz at word puzzles, and had a good sense of humor and a contagious smile. She enjoyed singing, line dancing, visiting family and serving others. She was known to name and feed the box turtles in a courtyard at the Mother House and loved birds and small animals. Joy was the characteristic trait shared by the twins.

Preceding Sister Catherine Rose in death were her parents and her four sisters, Jean Tipps, Ann Lawyer, Frances Minks and Sister Mary Alberta. Survivors include her nieces and nephews and her SCL Community.