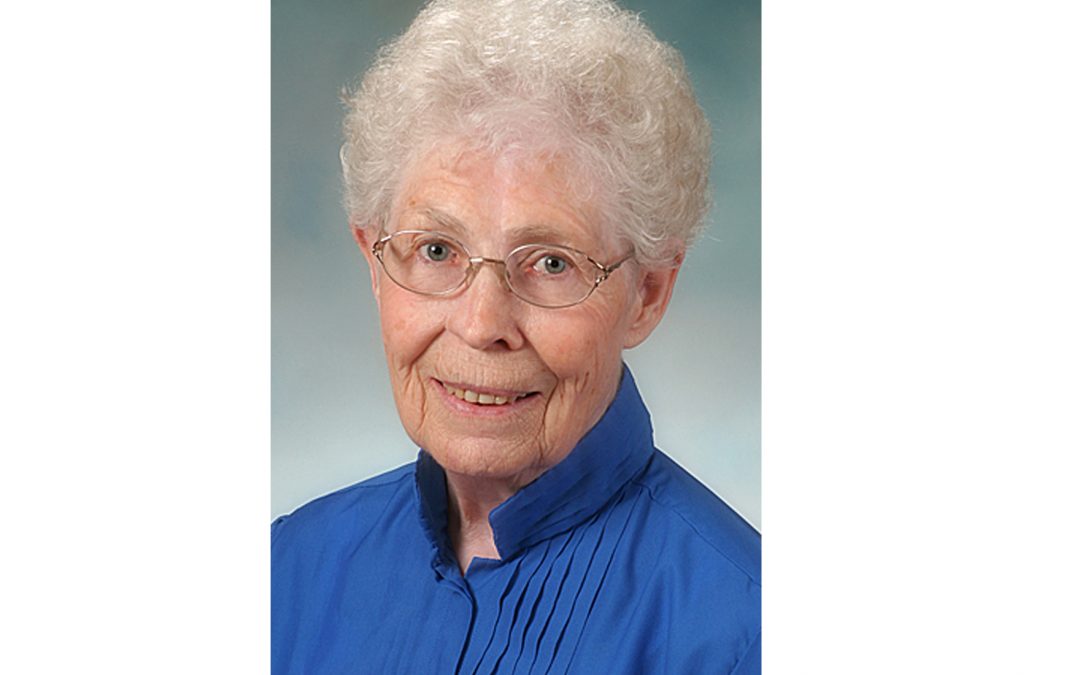 “Lord, make me a channel of your peace. Where there is hatred, let me bring love.” – From the hymn version of the Prayer of Saint Francis

Sister Regina Ann Green was known for her sense of humor and her commitment to family. She loved music, playing keyboard, dance and watercolor painting. She especially valued charity as a defining characteristic of her religious community and sought to reflect this in her life and work. Sister, 89, transitioned to eternal rest on July 13, 2020 in Ross Hall at the Motherhouse. She was an SCL for 67 years. She entered the SCL Community on Oct. 5, 1952 and professed vows as Sister Regina Ann on Oct. 7, 1954.

Mary Ann Green was born on March 16, 1931 in Stratton, Colo., the eighth of ten children of John V. and Anna (Ast) Green. She inherited a strong Irish Catholic heritage, which influenced two of her siblings to become Benedictine Sisters. She attended St. Charles Grade School and Stratton High School in Stratton, Colo. She entered the SCL Community on Oct. 5, 1952 and professed vows as Sister Regina Ann on Oct. 7, 1954. In 1967, she completed an elementary education degree at Saint Mary College, Leavenworth, Kan. In 1988, she received a Master’s degree in pastoral ministry and religious education from Seattle University.

Teaching was the great love of Sister Regina’s life and ministry. She spent 26 years as an elementary school educator, which took her across the Midwest and West, teaching in Missouri, Kansas, Colorado, Wyoming and Montana. She taught a wide range of ages and subjects, all the basics, plus art, music, and physical education.

In the late 1970s, health issues prompted her to rethink her ministry focus. In 1980, she tried administrative work at St. John’s Hospital in Santa Monica, Calif., but the pull of teaching steered her toward religious education, which she felt complemented her professional background. In 1982, she served as the director of religious education at Holy Trinity Parish in Colorado Springs, Colo. A few years later, she moved to St. Mary’s Parish in Montrose, Colo., to disciple adults. Four years later, she went to St. James Parish in Denver to serve as the long-time director of religious education. She stayed for 19 years and thoroughly enjoyed her role in adult faith formation. She considered helping converts through the Rite of Christian Initiation of Adults (RCIA) to be the highlight of her years as an educator. “It was wonderful, working with people coming into the Church,” she said. “I really enjoyed that.”

In 2007, Sister Regina entered retirement and gave her attention to music and painting, as well as keeping up with family, especially doting on the arrival of newborn nieces and nephews. As a lover of music, she kept a copy of the hymn version of the Prayer of St. Francis in a favorite book, which she often consulted. The prayer is a petition to God asking to be made into “a channel of your peace.” Next to charity, Sister Regina sought to be a channel of God’s peace, bringing love, hope and understanding to all.