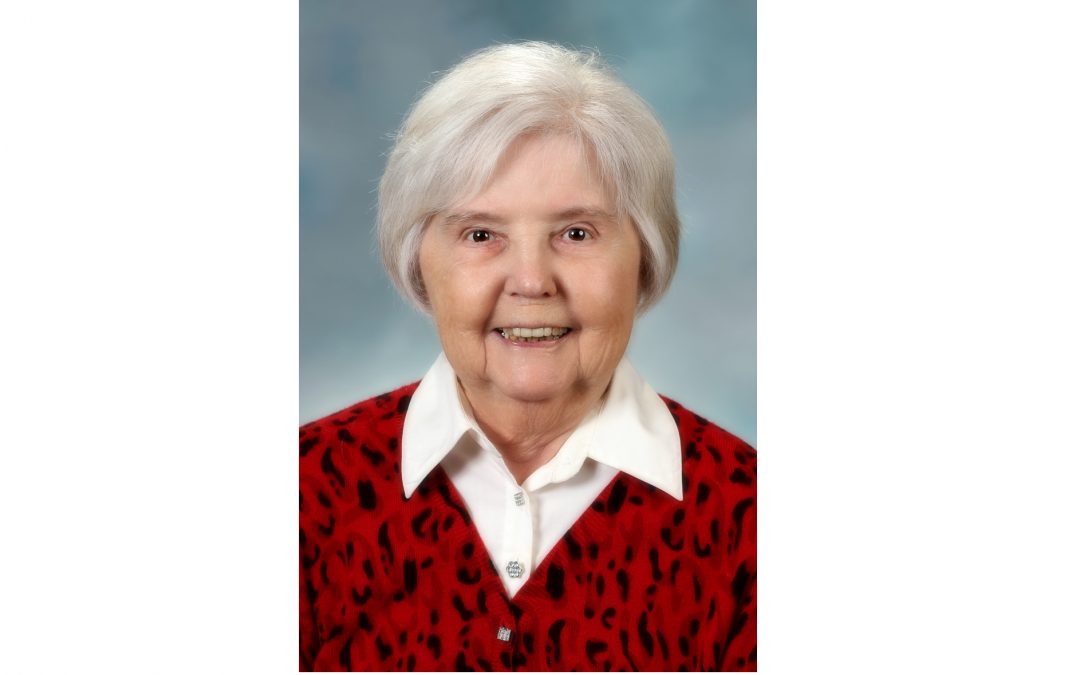 “Everything about being a Sister makes me happy…I am blessed to be able to enjoy life to its fullest!” —Sister Mary Sharon Verbeck

For almost 60 years, Sister Mary Sharon devoted her life to a ministry of education and school administration. She described her best moments as celebrating the “little successes’’ with students as they matured through life. Though petite, with a quiet little voice (especially over the school intercom), she was revered as a non-stop giant among students, faculty, and staff. Sister Mary Sharon was also a dedicated, life-long sports fan whose love of the Kansas City Royals was once profiled with other Sisters in the Kansas City Star (Oct. 25, 1985). She relished having the same birthday as Kansas City Chiefs quarterback Patrick Mahomes.

Elizabeth Louise Verbeck was born on Sept. 17, 1928, in Kansas City, Kan., the seventh of eight children of George and Margaret (Sachen) Verbeck, who shared a deep Croatian Catholic heritage. She attended then-St. Mary Grade School and Bishop Ward High School in Kansas City, Kan., and was on champion sports teams at both schools. Her mother once remarked that she was never at home, but was either at the convent or the ball diamond. She entered the SCL Community on Aug. 14, 1946, and professed vows as Sister Mary Sharon Verbeck on Aug. 15, 1948.

From 1948 to 1971, Sister taught every grade, one through eight, in schools in Colorado, Kansas, Oklahoma, and Wyoming. During this time, she earned her bachelor’s degree in education from then-Saint Mary College in Leavenworth, Kan., in 1960.

In 1972, she went to provide administrative support at St. Pius X High School in Kansas City, Mo. Little did anyone know, she would stay more than 41 years, pausing only to serve at nearby Hogan High School from 1981 to 1983. After returning to St. Pius in 1984, she stayed until her retirement in late 2007. During those years, she juggled multiple responsibilities with ease: managing the office and bookstore, supervising study hall and the cafeteria, working as registrar, and planning several graduations. She also volunteered for dances, talent shows, and fundraisers (even taking on the role of Lady Liberty in a musical benefit). As one person commented, “The students love Sister Mary Sharon; their parents love her; and their grandparents love her. And the feelings were mutual.”

In 2004, Sister Mary Sharon was awarded the Service to Education award at the annual Northland Regional Chamber of Commerce Education Banquet. Emcee Katie McGukin, a local radio personality, described her as the “heart and soul” of St. Pius. School principal Joe Monachino, Jr., credited her with shaping his professional career, while adding respectfully, “she tells it like it is.” In June 2005, she earned a place of honor on the “Pillars of St. Pius” donor wall for her notable contribution to the school.

A 2006 hip replacement surgery did not slow her. Students were often seen pushing her down the hall in a seated walker when she needed to see someone. Even her 2007 retirement didn’t keep her from her beloved school, where she continued to serve as a volunteer. She once quipped that she wanted to “die with her boots on at St. Pius.” In 2019, St. Pius held a 90th birthday celebration for her, which she adored. Reflecting on her life, Sister Mary Sharon once said, “I’ve loved everything I’ve done and all I’ve been asked to do. Everything about being a Sister makes me happy. … I am blessed to be able to enjoy life to its fullest!” In her last years, she kept up with former students, attended family celebrations, and continued a lengthy pen-pal relationship with one of her nephews.