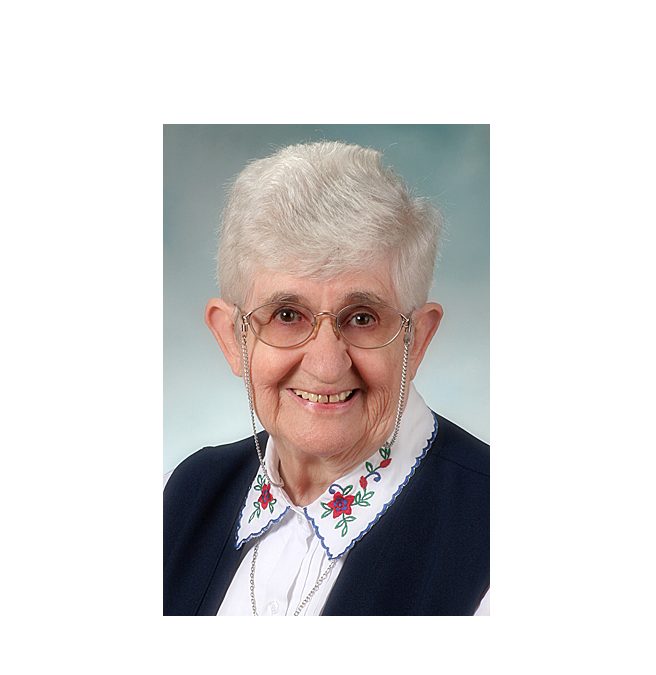 “Ring out your joy to the Lord all the earth. Praise is fitting for loyal hearts.” – Psalm 33:1

“Ring out your joy to the Lord all the earth. Praise is fitting for loyal hearts.” This was the theme of Sister Eileen Sheehy’s Golden Jubilee, celebrated in 1996, and has resounded throughout Sister’s life and ministries.

Sister Eileen Sheehy, 94, a Sister of Charity of Leavenworth (SCL) for 75 years, died on July 29, 2022, at Ross Hall in Leavenworth, Kansas. Sister Eileen, always proud of her Irish, Catholic, Butte heritage, was known as an excellent educator, pastoral minister, and lover of music with a warm, hospitable, and welcoming smile.

The youngest of seven children, Eileen Sheehy was born on March 15, 1928, in Butte, Montana, to Cornelius (Con) and Anna (Hanley). Her older sister, Margaret Mary (Sister Mary Serena), joined the SCL Community and Eileen entered a few years later on August 14, 1946, taking the religious name of Sister Gregory, later returning to her Baptismal name of Eileen.

Sister Eileen served as an elementary teacher and principal in schools across the West and Midwest. After many experiences in teaching and administration in several schools, Sister Eileen served as the Superintendent of Schools in the diocese of Kansas City/St. Joseph. In 1965, she joined others from the diocese to march with Dr. Martin Luther King, Jr. for racial justice in Selma, Alabama. With a strong spirit of right and justice, she represented many who were not able to be physically present for the Selma march. Her picture appeared in many newspapers and publications and her likeness was displayed in The Undefeated, a children’s book recounting the efforts for racial justice.

Sister Eileen held an Ed.D. and an M.A. in Pastoral Studies. Other ministries in her lifetime included Juniorate and Vocation Director for the SCL community, acting Head of the Education Department at Saint Mary College in Leavenworth, and parish work. With dear SCL friends Sister Susan Newland and the late Sister Bonnie Bachle, the three shared their many gifts and talents in several parishes across various states for almost 50 years before moving home to Leavenworth.

Sister Eileen had a great love for her family, friends, SCL community, and all she encountered. She was witty, loving, and wise, and lived deeply, joyfully, and gratefully.

Preceding Sister Eileen in death were her parents; her five brothers: John, Tom, Edmund, Joe, James, and her sister, Sister Mary Serena Sheehy, SCL, and the deceased Sisters and Associates of the SCL Community. Sister Eileen will be missed by her many nieces and nephews, her friends, and all of her Sisters of Charity of Leavenworth and Associates.

Click below to read the SCL Community remembrance for Sister Eileen.
English | Spanish