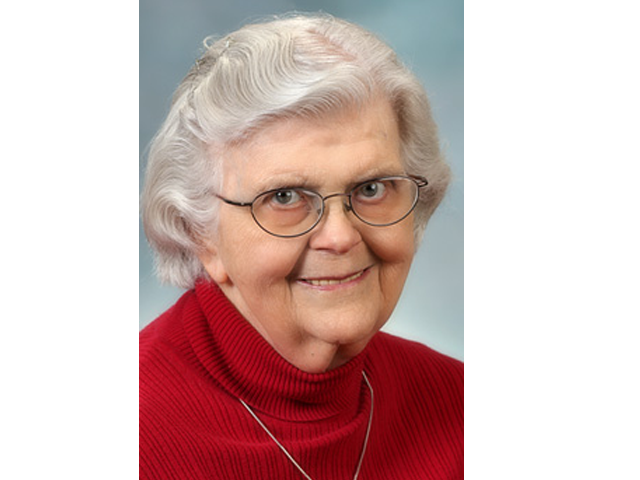 “Does anybody realize what life is while they’re living it — every, every minute?”
Thornton Wilder, “Our Town”

In response to this question posed in a play that she treasured, Sister Margaret Marie Mitchell seemed to value the minutes and the minutiae of life and was able to weave them well into the unified whole of her ministry and service. She was an SCL for 71 years — an educator par excellence, and a pastoral minister in parishes and a healthcare facility. She loved people, cats and the Kansas City Royals. She was happy to have lived long enough to see the Royals win their second World Series. Sister Margaret Marie, 93, died on March 1, 2018 in Ross Hall.

Madge Katherine was born Nov. 13, 1924 in Kansas City, Mo., the youngest of four children of Eugene P. and Madge L. McGinley Mitchell. Her father’s job took the family east during Madge’s childhood, but the Mitchells returned to the Midwest where Madge graduated from St. Teresa’s Academy and attended the College of St. Teresa, both in Kansas City, Mo. She completed her college studies with a bachelor’s degree from Saint Mary College, Leavenworth. She entered the SCL Community on Aug. 14, 1946 and professed vows as Sister Margaret Marie on Aug. 15, 1948. She later earned her master’s degree from St. Louis University.

From 1948 through 1980, Sister taught English, speech, drama and religion at high schools in Billings, Butte and Helena, Mont., and Kansas City and Topeka, Kan. She loved working with students and directing theater productions. In the process, she imparted important life skills to her students. Her longest tenure was at Bishop Ward High School, Kansas City, Kan. In 2008, the school inducted Sister into its Hall of Fame and presented her with the Fine Arts Distinguished Achievement Award. Former students arranged a trip for her to New York for a Yankees-Royals game and a Broadway show. It was a winning combination: the final season in the old Yankees’ stadium; KC Royals baseball; and a theater production.

Sister Margaret Marie transitioned from teaching to parish ministry at Our Lady of Good Counsel, Kansas City, Mo.; St. Ann’s, Prairie Village, Kan.; and Our Lady of the Presentation Parish, Lee’s Summit, Mo. In these roles, she coordinated high school religious education, ministered to the homebound and elderly, and assisted with other programs. She devoted her final active ministry to pastoral care at Truman Medical Center East, Kansas City, Mo., where she tried to say “God bless you” to everyone she met and gave special blessings to newborns. In 2006, she received “Heroes in Healthcare” recognition for her service. Sister retired in September 2009 and moved to the Mother House on Nov. 19, 2009 where she volunteered. She began living in Ross Hall on June 1, 2016.

Sister Margaret Marie never knew a stranger. She was compassionate, kind and fun. As testimony of her family’s love and respect, several nieces are named in her honor.

Preceding Sister Margaret Marie in death were her parents; her sister Mary Emily Fahey; and her brothers Eugene P. and John M. Mitchell. Survivors include her sister-in-law Norma Mitchell, Prairie Village; nieces and nephews; and the SCL Community.