Being a presence at the border 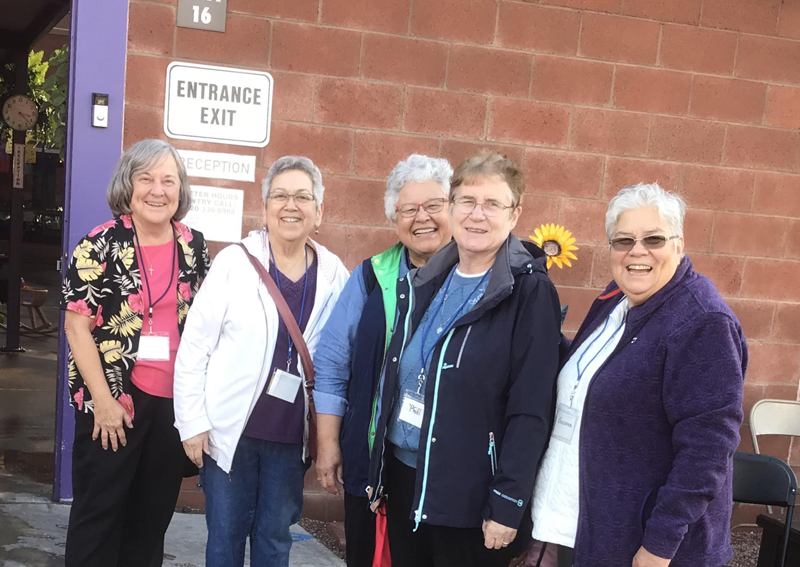 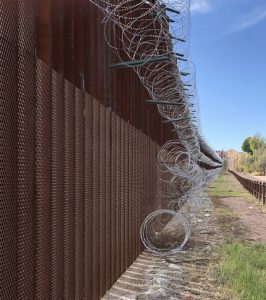 She will never forget the rows of barbed wire at the border crossing in Nogales, Mexico, an hour south of Tucson (photo at left). Sister Phyllis, who lives in Leavenworth, says there appeared to be more razor wire at the border than surrounding tops of exterior walls of the many local Kansas prisons.

Despite this stark image, the Sister of Charity of Leavenworth saw the face of God in the smiles on the brown faces that she encountered. “These were people who were tired and who needed help,” she explains. “I came home with a broken heart, but I have deeper understanding of their plight and deeper compassion.”

Sister Phyllis was in a group of five Sisters who volunteered together. Three were women religious she had met through a program sponsored by the Leadership Conference of Women Religious (LCWR). They had interacted via video and teleconferences but had never met in person. The fourth was Sister Phyllis’ housemate, Sister Josephine Macias, CDP, a Sister of Divine Providence, and director of faith formation at St. Francis de Sales Parish, Lansing, Kan. Pictured above, left to right, Sisters Carol Wagner, RDC; Josephine Macias, CDP; Phyllis; Philippa Wall, PBVM; and Susana Vasquez, Mission San Jose Dominicans.

The Sisters volunteered at Casa Alitas, a program of Catholic Community Services of Southern Arizona that provides care, short-term shelter and help to reunite migrants with family members in the U.S. During their time in Tucson, the Sisters were among those welcoming and assisting two busloads of asylum seekers each day. There were as few as 20 persons on the buses and as many as 100, most from Guatemala, Honduras and Venezuela. Casa Alitas has accommodations for 160 migrants.

During intake, volunteers offered water, soup and watermelon to hydrate, warm and nourish the new arrivals who received orientation to the facility and its rules. In addition, volunteers helped the migrants connect with family members and secure travel arrangements to their destinations. Casa Alitas is a way station at which the migrants – many of them women with young children and women traveling alone – stay on average two to three days. 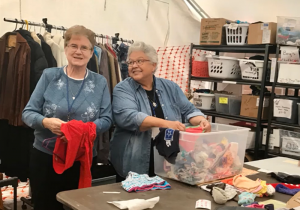 Sister Phyllis spent most of her volunteer service in the clothing store where the travelers could select two days of donated clothing for each family member. With funds from several Sisters of Charity of Leavenworth, Sister Phyllis replenished needed items in the store. Sister Josephine, who spoke fluent Spanish, made rounds with the volunteer physicians who performed medical exams.

“I didn’t go there thinking it would be easy,” Sister Phyllis observes. “It was more that we needed to be there as a presence.”

There was the woman who had her baby three days earlier at the border and required attention. There was the five-year-old Sister Josephine talked with during the medical exam as part of the intake process. When Sister noticed that he was looking sad and tired, she told him that he was in the United States now. He broke into a broad smile and said, “Yes.” There were hugs by the children as they arrived and many expressions of gratitude by the migrants unaware of the harsh reality that close to two-thirds would eventually be required by the immigration courts to return to their homelands.

Sister Phyllis continues to process her border experience and to consider next steps and other action she might take. She concludes, “It was a profound life-changing experience.”