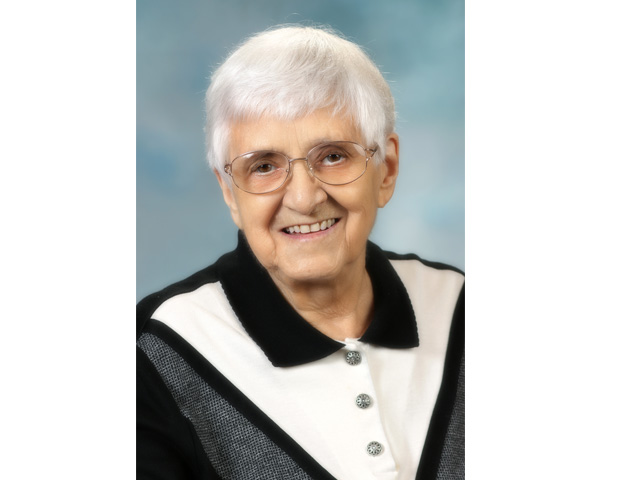 Whatever she did, Sister Jean Highberger did it from and with her heart for the Lord and in his Spirit, for others. Matters of the heart were important to her. Following a holy hour before the Sacred Heart shrine as a college student, she knew that she wanted to join the Sisters of Charity of Leavenworth. Her devotion to the Sacred Heart continued as she took the name “Sister Jean Cordis” — “cor, cordis,” Latin for the heart, mind/soul/spirit. Throughout her life and ministries, Sister Jean spent her heart generously and charitably. She loved helping people. Sister Jean, 89, died in Ross Hall on May 23, 2018. She was an SCL for almost 69 years.

Born on Jan. 12, 1929 — her mother’s birthday — Loretta was the second youngest of eight children of Theodore and Clara Hoefler Highberger. She grew up in Westphalia, Kan., where her father farmed. Their home lacked running water and electricity, but the family had good, wholesome fun. As a student, Loretta had a competitive streak. She was the county spelling champion and class salutatorian. She didn’t want to be a Sister or a teacher. However, the job market needed teachers. At age 17, she spent a year teaching grades one through eight. Loretta then declared herself ready to pursue a degree in dietetics. God’s plan and her mother’s insistence on a Catholic education placed Loretta at Saint Mary College, Leavenworth, where she met the SCLs. As a sophomore, she decided to join the Community. She entered on Aug. 18, 1949 and professed vows as Sister Jean Cordis on Aug. 15, 1951. She later shortened her name to Sister Jean.

Earning bachelor’s and master’s degrees in education, Sister taught or was a principal for 28 years. From 1979 to 1983, she cared for her aging and sick parents and sister. Next, Sister Jean provided administrative support at Bishop Hogan High School, Kansas City, Mo., and for the school office of the Diocese of Kansas City-St. Joseph, Mo. Her phenomenal clerical, writing and organizational skills matched her ability to work with people and to remain even-keeled – traits long recognized by her family. Sister Jean was the keeper of a detailed family calendar and the go-to person for prayers in times of need.

Sister retired from the school office in June 2003. Her volunteer service at Duchesne Clinic, Kansas City, Kan., earned Sister Jean recognition in 2009 as volunteer of the year for her efforts in tracking donated medications. The award acknowledged her attention to detail, commitment to patients and her spirit. When Sister Jean moved to the SCL Mother House in May 2010 and to Ross Hall in September 2015, her spirit of hospitality, dependability and charity continued as a volunteer and a friend.