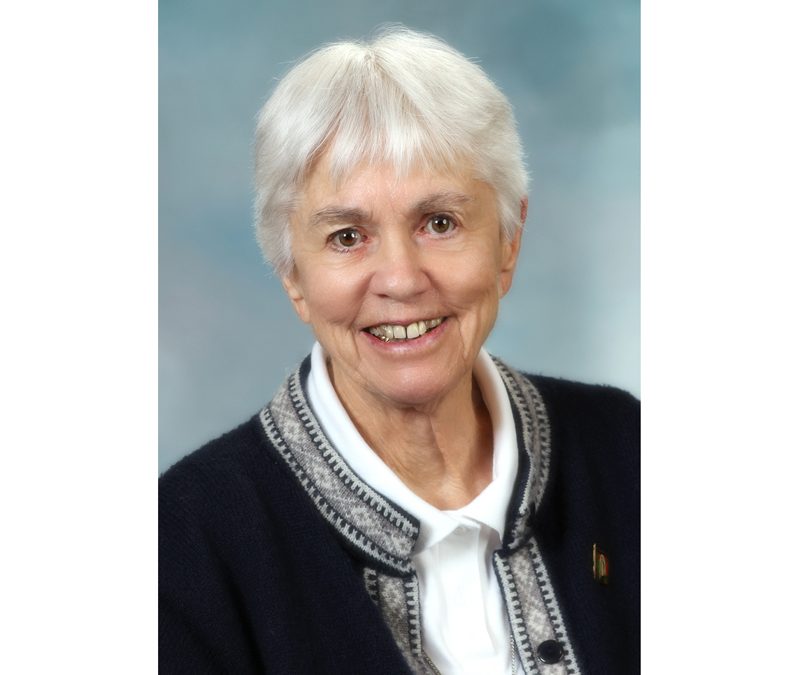 “Be firm, steadfast, always fully devoted to the work of the Lord, knowing that in the Lord your labor is not in vain.” —1 Corinthians 15:58

With her heart and mind focused on serving, Sister Catherine Nichol was a person of strong determination matched by her deep compassion for persons who were poor. Whether teaching, ministering in Peru, or visiting the sick and the elderly, she was fully devoted to the work of the Lord. Sister died on Jan. 10, 2020, in Ross Hall. She had just observed her 75th anniversary as a Sister of Charity of Leavenworth and was approaching her 96th birthday.

Catherine was born on Feb. 24, 1924 in Redmond, Ore., the first of three children of Bernard E. and Stella Nies Nichol. The family moved to Billings, Mont., where Catherine completed grade school and high school. After working a year, she attended Saint Mary College, Leavenworth as a freshman. On Sept. 5, 1944, she entered the SCL Community. Catherine professed vows on March 10, 1946 as Sister Florence and later returned to her baptismal name.

The first 21 years of her ministry as an SCL, Sister Catherine taught third- and fourth-graders and then science to high school students. She earned her bachelor’s degree from Saint Mary College, Leavenworth, and her master’s from Saint Mary’s Col-lege, Winona, Minn. Both degrees were in biology.

Sister Catherine had a knack for finding adventure and embraced the opportunity to serve in the Peruvian missions where she spent almost 40 years. She seemed to be made for the times and the ministries of the post Vatican II Church. After brief stays in Talara and Ayabaca, she helped open the new SCL mission in Chalaco in the Andes Mountains in February 1971. From this base, the Sisters travelled to far-flung villages to train laypersons for roles in the Church. Mules were their main mode of transportation, and the animal assigned to Sister Catherine knew to stay the course to their destination and not to linger for long visits. Chalaco was her beloved mission for 20 years.

Her compassion for the poor found a new outlet in Piura where Sister Catherine did faith formation and sacramental preparation with people in impoverished areas of the city. Sister also coordinated breakfast and lunch programs for children in the barrios and pur-chased fresh fruit to supplement the menu. Sister Catherine treasured the people she met and served while in Peru and remained fixed on meeting their needs. Like Mother Xavier Ross whom she admired, Sister had a strong spirit of adventure, faith and service.

After 19 years in Piura, Sister Catherine returned to the United States in 2007 and volunteered in a Latino parish and other ministries in Billings. She retired to the SCL Mother House in October 2015 and moved to Ross Hall in May 2018.

Preceding Sister Catherine in death were her parents and her sister-in-law Eileen Nichol. Survivors include her brother Bernard Nichol, Belmont, Calif.; sister Marilyn Rathman (Frank), Santa Rosa, Calif.; nieces and nephews and their families; and her SCL Community.