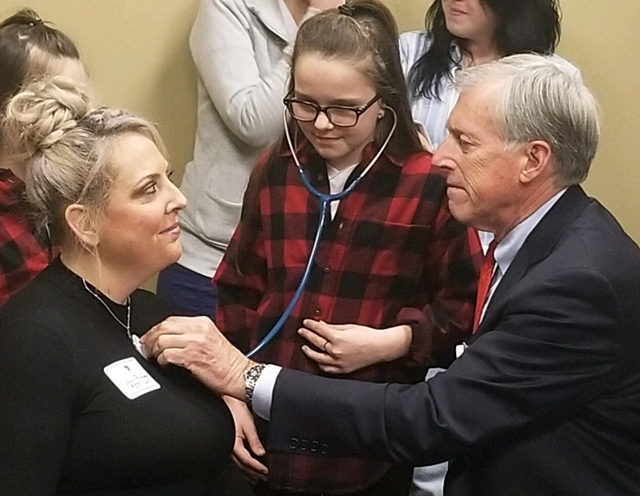 Matt Sollars was 25-years-old when he died five years ago, but his heart lives on in Jamie Poindexter, transplant recipient from Pea Ridge, Ark. 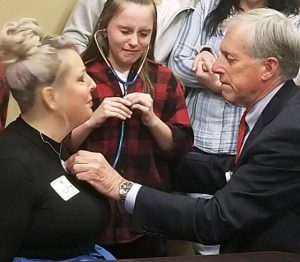 Hearing her dad’s heartbeat was an emotional experience for Madison.

Recently, Matt’s two daughters, his wife Emily Sollars and grandmother Mary Irick met Jamie during a holiday gathering at St. Luke’s Hospital, Kansas City, Mo. In the encounter that Emily describes as both emotional and exciting, family members had the opportunity to listen to Matt’s heart – now Jamie’s heart – beating.

Emily, a nurse aide with the Sisters of Charity of Leavenworth, explains that the experience deeply touched Madison, almost 12, and Maycie, 9 (pictured above with Jamie and Dr. Michael Borkon). “Madison told Jamie that we should be strangers, but that meeting her seemed so natural,” Emily says. “Madison called her dad a hero.”

At the time of Matt’s death, his daughters were 4 and 6. Emily describes him as a person with a big heart. At his young age, Matt had told her that if anything happened to him, he wanted to be an organ donor. He died on Aug. 13, 2013 in St. Joseph, Mo. Not long after, Jamie, 40, traveled to St. Luke’s Hospital for the transplant. She had experienced failure with a prior transplant, but Matt’s heart has had staying power.

Matt lived in Atchison, Kan., with Emily and daughters at the time of his death. He was originally from Leavenworth, where his grandmother had raised him. She was able to identify Jamie as the transplant recipient and connected with her through social media. Both Mary Irick and Emily have continued to correspond with Jamie via social media over the past five years. 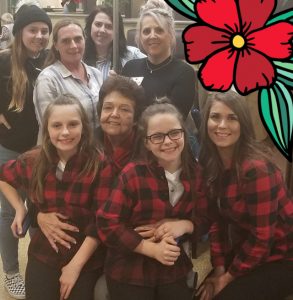 Emily and her daughters moved to Leavenworth in 2016. She remarried and has a 3-year-old son. She believes that everything happens for a reason. “God placed Matt in my life; he was my first love,” she sums up. “He’s not here any longer, but his heart has not stopped beating. A tragedy turned beautiful.”