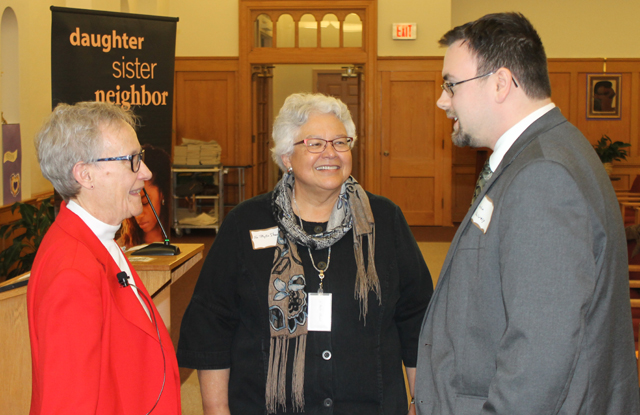 Sister Jeanne Christensen, a Sister of Mercy, described human trafficking as modern day slavery during a presentation on Tuesday, March 12 at the Mother House of the Sisters of Charity of Leavenworth. She called trafficking a prevalent problem and a hidden crime for the victims who fear retaliation by the traffickers. The SCL Human Trafficking Interest Group hosted the session that focused on domestic trafficking in the United States. Pictured above, left to right, Sister Jeanne; Sister Phyllis Stowell, SCL Councilor; and John Shively, coordinator of the SCL Office of Justice, Peace, and Integrity of Creation.

In her opening remarks, Sister Jeanne said that trafficking involves force, fraud or coercion — one or more. Types of trafficking include sex, labor, domestic servitude, child labor and forced marriage. Victims can be anyone. However, vulnerable populations, such as runaway youth, persons experiencing poverty or attempting to escape war or oppression, tend to be more susceptible. Predators recruit victims using the Internet and smart phones and going to locations such as college campuses, night clubs and strip clubs. Sister added that traffickers also can be anyone.

Trafficking exists, Sister Jeanne explained, because it is a large business. “With more than $152 billion earned from trafficking in 2018, it is the second fastest growing criminal industry in the world,” she noted.

As for what individuals can do to counter human trafficking, Sister Jeanne encouraged collaboration with like-minded organizations and persons. She listed advocacy as a key action step and suggested helping build awareness about this issue with legislators, friends and family members. She emphasized the importance of nurturing and building self-esteem among young people and helping them understand ways they could be at risk of trafficking. She also stressed the need to be conscientious consumers who avoid purchasing items or products made by slave labor.

“Keep advocating,” she repeated to the group as she provided a number of resources to increase awareness of the magnitude of this issue. In the event persons suspect an incident of trafficking, Sister Jeanne shared information about reporting to the National Human Trafficking Hotline (1-888-373-7888) or to local law enforcement.