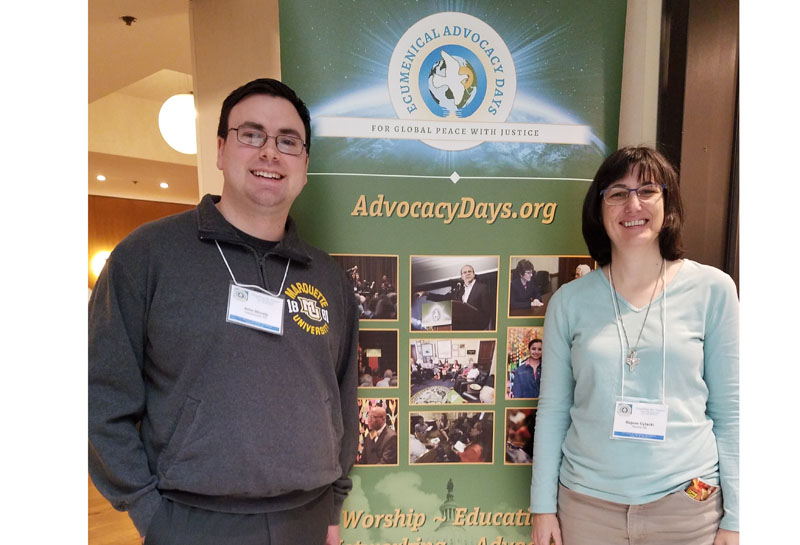 The rich content and the energy and enthusiasm of participants – many of whom were young people – impressed Sister Réjane Cytacki and John Shively, who attended this year’s Ecumenical Advocacy Days in Washington, D.C., April 5-8.

Started in 2003, this conference has evolved into a premier Christian advocacy event in the United States drawing 1,000 persons annually. It was the first time Sister Réjane and John attended. John says, “This was an exciting and new experience, especially coming together with other Christians working toward the common good.”

Of the plenary sessions, Sister Réjane and John both found the session on voting rights informative and current trends related to this issue troubling. From relocation of a polling place in Dodge City, Kan., to Georgia’s exact match voting registration, it appears voter rights are being suppressed. Add to this, Senate Majority Leader Mitch McConnell’s refusal to bring the House electoral reform bill to the Senate floor. John is hopeful that local communities can encourage eligible persons, especially young adults, to exercise their voting rights.

Sister Réjane, executive director of the Eco-Justice Center, Racine, Wis., attended workshops on a multi-agency collaboration to bring renewable energy to working class people affordably; infringements on natural resources and sacred lands held by indigenous peoples; and grassroots response to a policy on Israel and Palestine. She was excited about the energy initiative that plans to train local people to build a solar community project for a neighborhood or community center. With respect to the indigenous movements, she identified the need to stand with indigenous people and offer support and help.

John, coordinator of the SCL Office of Justice, Peace, and Integrity of Creation, attended workshops on multi-faith coalition-building for social change; ways to equip churches to care for creation; and voter suppression. He gleaned practical applications and resources from the sessions along with recognition of the importance of using social issues as a unifying force based on shared values.

In addition to the presentations, Sister Réjane and John visited congressional leaders from Wisconsin and Kansas. Ecumenical Advocacy Days builds this opportunity into the annual gathering.

“Troubling the Waters for the Healing of the World” was the theme of Ecumenical Advocacy Days. “The idea is that we who have a voice can advocate for those who could not be present but who are affected unjustly by U.S. policies and laws,” Sister Réjane explains. “We must be the persons to cause ‘good trouble’ and be there to stir the waters so people have access to what they need just as Jesus did for the sick man in the Gospel story who did not have anyone to help lower him into the water.”