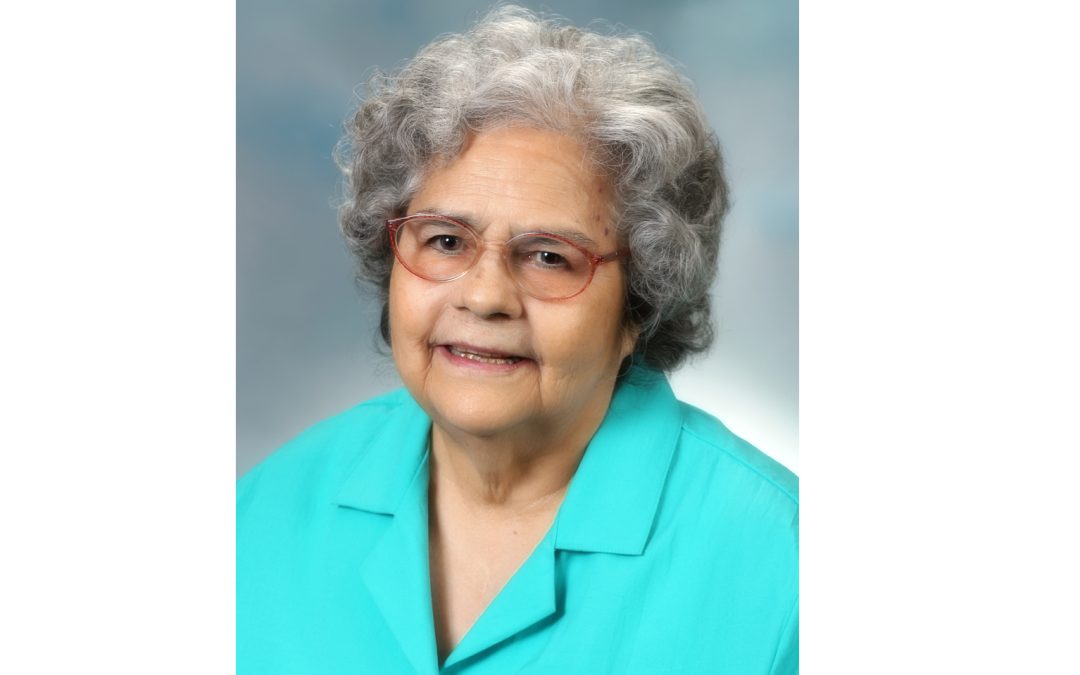 “I believe that people should love what they do. They should reach out to others. Share what you have and you will be given one-hundredfold in return.” – Sister Mary Marcianna Trujillo

Sister Mary Marcianna Trujillo, 92, a Sister of Charity of Leavenworth (SCL) for 73 years died, on Sept. 16, 2022, in Ross Hall at the Mother House in Leavenworth, Kan. She was a devoted soul who loved her various ministries, her family, friends, and SCL Community. She was an inspiration to many. Her life’s credo was, “Love what you do…share what you have, and you will be given one-hundredfold in return.”

The fifth of 10 children, Julia Rainey was born on April 5, 1930, in the ranching and farming community of Watrous, N.M. to Ventura and Annie (Gonzalez) Trujillo. Ventura died young leaving Annie alone to raise the surviving children. She was a woman of deep faith and a lifelong inspiration to her daughter Julia who shared this conviction. Upon her high school graduation, Julia was accepted into nursing school with a full scholarship. In preparation for her training, Julia took a job at St. Anthony’s Hospital in Las Vegas, N.M. A Sister from the SCLs traveled to the hospital to teach a Bible course to employees and that was the beginning of the end of Julia’s nursing future. A young and inspired Julia entered the SCL Community as Sister Julia Rainey Trujillo on Aug. 18, 1949. She later changed her religious name to Sister Mary Marcianna.

Sister Mary Marcianna spent her first years teaching in the Midwest and Peru. Students remember her as a teacher in and out of the classroom, an ultimate mentor who was a strong force in a small package. For the next 16 years, Sister served as an operator for the Mother House switchboard, providing a welcoming, knowledgeable spirit to all she encountered. Later, Sister worked at Our Lady of Guadalupe Parish in Omaha, Nebr., where she served as the director of religious education. In 2005, Sister Mary Marcianna served at Duchesne Clinic in Kansas City, Kan. She retired to Ross Hall in 2007 where she was a fervent pray-er and companion.

A vigil will be held at 7:00 p.m. on Thursday, Sept. 29, in Ross Chapel, SCL Mother House, Leavenworth. Mass of Christian Burial will be celebrated in Ross Chapel at 10:30 a.m. on Friday, Sept. 30. Interment will follow in Mount Olivet Cemetery, Mother House grounds. Memorial contributions can be made to the Sisters of Charity of Leavenworth, 4200 S 4th Street, Leavenworth, Kan. 66048. Arrangements made by Belden-Larkin Funeral Home.

We realize attending the funeral services of a loved one is a natural and healthy way to honor the deceased, however, we ask that no public guests besides those invited enter the Mother House at this time. We appreciate your cooperation and will hold you in prayer.