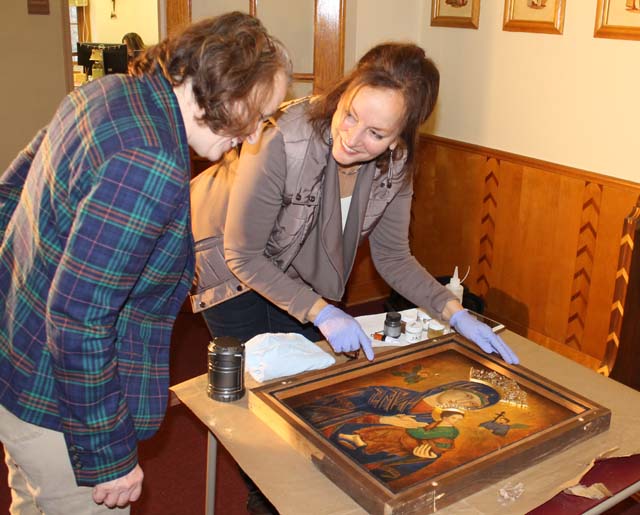 Recent restoration of art in the Our Lady of Perpetual Help Oratory at the Mother House of the Sisters of Charity of Leavenworth (SCLs) has significantly revived vibrant colors in the paintings. An added bonus was the uncovering of a previously unknown dedication signed by the original artist.

Peggy Van Witt, founder and chief conservator of Van Witt Fine Art Conservation, Overland Park, Kan., completed the restoration. Her work included the large icon/painting of Our Lady of Perpetual Help and the 14 Stations of the Cross, all dating to 1940. 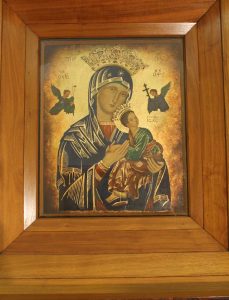 The restored icon of Our Lady of Perpetual Help.

Before conservation treatment, the paintings showed signs of extensive deterioration. The surfaces were flaking with craquelure (pronounced “crack loor” – a network of fine cracks in the paint or the varnish of a painting); the gold leaf had significantly faded, some areas void of any remaining gilding; the gemstones were loose, detached or missing completely from the crowns; and the luster that once radiated from the icons had dulled. Peggy thoroughly examined the artworks and took their respective conditions into consideration to allow for proper cleaning, stabilization and restoration of all losses.

The conservator worked on the Stations of the Cross in the small chapel. She took the large icon to her studio for its major restoration. Throughout the restoration process, Peggy drew upon her vast experience and adhered to the Code of Ethics and Guidelines for Practice of the American Institute for the Conservation of Historic Works (AIC). She returned the icon of Our Lady of Perpetual Hope to the chapel for installation under ultraviolet protective conservation glass.

Lino Lipinsky painted the art in 1940 when he designed the interior of the small chapel on the main floor of the then new SCL Mother House, dedicated on Nov. 11 that year. When the maintenance team removed the painting of the Madonna and Child from its custom frame, Peggy and Tonya Crawford, SCL archivist, (both pictured at top of page) discovered a tiny inscription along the bottom right side of the art. Presumably, Lino, who had fled Italy at the beginning of World War II, painted the words “Patris in memoriam” – “In memory of his father.” His father Sigmund, also an artist, had died of a stroke in Italy within hours of knowing that Lino had reached the United States.

About the conservator
A third-generation art conservator, Peggy Van Witt has restored many other notable works including paintings of Thomas Hart Benton; installed and conserved artwork in the Crystal Bridges Museum of Art in Bentonville, Ark.; and stabilized the NASA flight manual that astronauts carried with them to the moon and back. 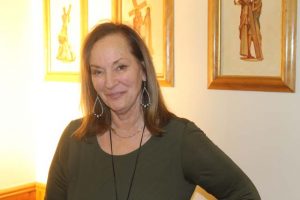 Working in the arts comes as a second nature to Peggy who credits her mother, an arts and antiques dealer, and her grandmother, a trained conservator and artist, for instilling her love and appreciation of art. The two women laid the foundation upon which Peggy has built her own profession. Looking back on her upbringing she remarks, “Art was what we did.”

Originally born in the United States, Peggy grew up in Germany. Her mother took Peggy and her older brother, then infants, back to her homeland in Europe after their father died. As a young woman, Peggy had a successful career as a creative director of a large American advertising agency in Germany. During her time at the ad agency, Peggy traveled extensively, lived in nine countries and learned four languages.

She quickly realized the untapped market for art conservation in the United States. Her brother, who had earlier returned to the U.S., gave Peggy her first commercial space in Westport, Conn., where she had her studio for six years. “I never looked back after this,” she says. As the business grew to accommodate the high demand for conservation, Peggy became a professional associate of the American Institute of Conservation in the United States. The Overland Park Van Witt Fine Art Conservation studio restored over 300 works of art in 2018. It continues to serve a growing market of museums, historical societies and collectors nationwide.