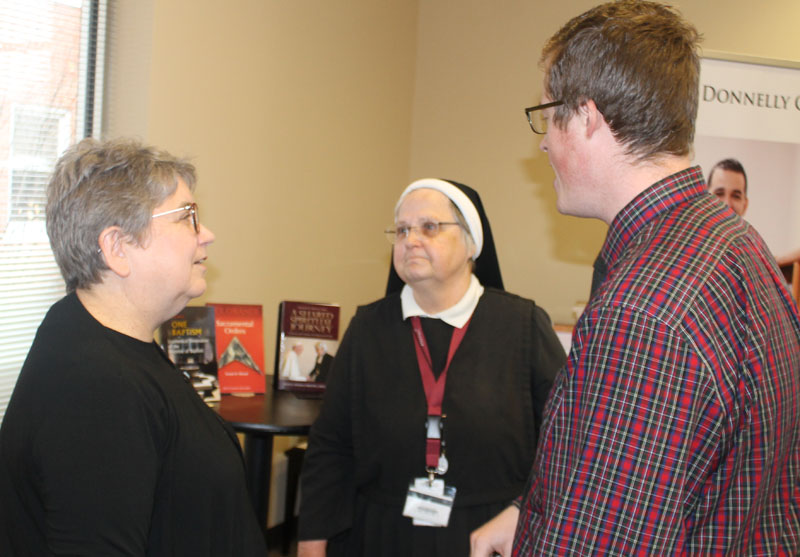 “The year 2017 changed the climate for ecumenism,” Sister Susan said.

This year marked the 500th anniversary of the Reformation with focus on the document “From Conflict to Communion” written by the International Catholic-Lutheran Dialogue. This document provides five principles/imperatives for moving forward with ecumenical dialogue:
• Start from the perspective of unity rather than division; strengthen what is held in common.
• Let believers be transformed by encounter with the other and mutual witness of faith.
• Commit to visible unity, elaborating what this means and moving toward goals.
• Rediscover the power of the Gospel for these times.
• Witness to the mercy of God in proclamation and service.

The document and the shared commemoration of the 500th anniversary signified a time for healing of memories, Sister Susan noted. “We can’t change the past,” she observed, “but we can change what is remembered.”

This includes new perspectives regarding Martin Luther along with renewed emphasis in Catholicism on Scripture and the priesthood of the baptized. The Second Vatican Council (1962-1965) marked a critical turning point in the Catholic Church and opened doors to ecumenical dialogue.

Sister Susan cited signing of the “Joint Declaration on the Doctrine of Justification” by Catholics and Lutherans on Oct. 31, 1999 as a date signaling “a sea change in relations” between the two denominations. In subsequent years, Methodist, Anglican and Reformed churches have affirmed this declaration.

Summarizing the foundational principles for dialogue going forward, Sister Susan listed unity in essentials, freedom in non-essentials and charity in all.

Read “From Conflict to Resolution.”

Read the “Joint Declaration on the Doctrine of Justification.”