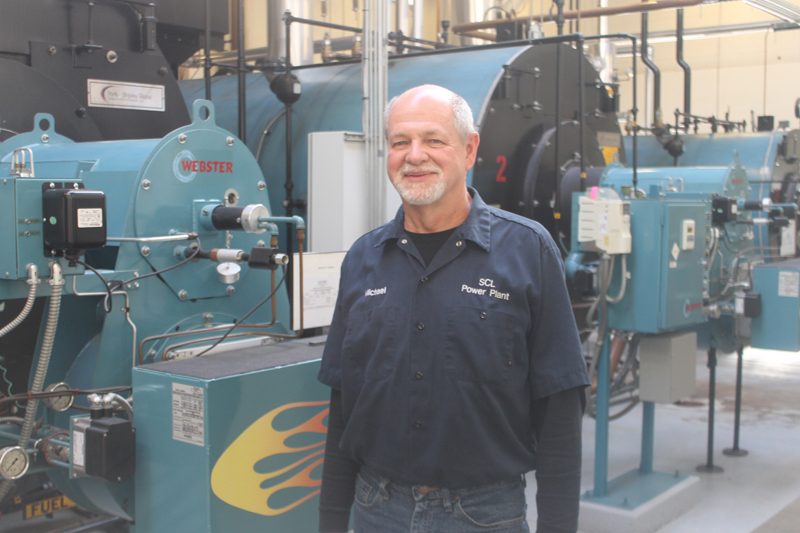 Marking his 45th anniversary as an employee of the Sisters of Charity of Leavenworth (SCLs), Mike Vornholt says he would gladly do it all over again. For all that he’s learned and all that he’s done in his job as manager of the power plant, he adds, “I feel like I won the lottery. I feel truly blessed.”

Mike is one of 13 employees whom Sisters and staff will recognize for milestone anniversaries during a program at the SCL Mother House on Friday, Dec. 6.

Following graduation from Leavenworth High School, Mike took heating and air conditioning classes at the vo-tech school in Kansas City, Kan. After working a few months with a refrigeration company in Leavenworth, he was laid off. His dad heard about the power plant opening with the SCLs. Mike applied, and got the job. He moved into management four years after he was hired.

Mike’s team of five full-time employees maintains heating and cooling for SCL facilities including the Mother House, Ross Hall skilled nursing facility and Cantwell Hall Offices, and for the entire Leavenworth campus of the University of Saint Mary. Almost all of the buildings use steam for heat and hot water, relying on large boilers with computerized diagnostic capabilities. The power plant also employs a computerized energy management system. Mike enjoys the combination of the mechanical and the high tech.

“I learned so much here through on-the-job training,” he says of his lifetime career. “I can’t believe how fast the time has passed.”

The next few months may move along even more quickly as Mike is planning to retire in May 2020. The lifelong Leavenworth resident has purchased a home in Nixa, Mo., a suburb of Springfield, and will relocate there next year. After 45 years on the job with the SCLs, he’s looking forward to a flexible schedule and to enjoying some of the attractions within easy reach of his new home.

Looking back, Mike appreciates that he’s worked in a good place with good people, pay and benefts. Anticipating a lot of change in the near future, he retains a positive outlook about the next leg of his journey and the new opportunities ahead.