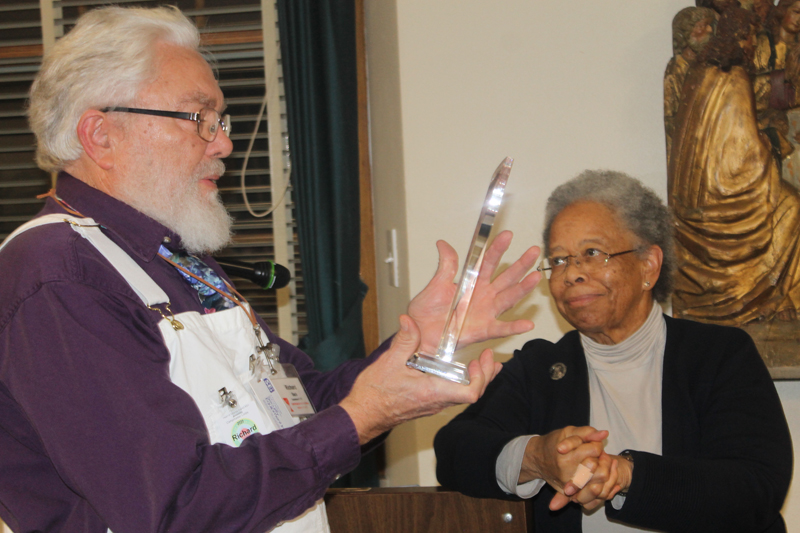 Richard Sack takes to heart the Gospel invitation to serve others. Because of this, he volunteers in prisons, in his church and in other settings in the Leavenworth community where he lives.

Without realizing it, by his good works and acts of charity Richard exemplifies the spirit of the 17th century saint to whom the Sisters of Charity of Leavenworth trace their roots. Because of this, the religious Community has presented Richard with the inaugural Vincentian Charism Award, named for St. Vincent de Paul.

Sister Constance Phelps, SCL Community Director, acknowledged Richard’s service during a ceremony on Founders’ Day, Nov. 11, at the Mother House. (To watch the video of the presentation, scroll down the page.)

Calling him a deserving recipient of the award, she said, “Like Vincent, Richard reaches out to those who are vulnerable and on the fringes of society. He sees needs, responds to them and engages others to work with him.” Among examples of Richard’s good works, Sister Constance cited his volunteer service at both the U.S. Penitentiary, Leavenworth, and the Lansing Correctional Facility. Monday is his prison day.

Several years ago, Richard kept encouraging his church to get involved with outreach to inmates. When a prison chaplain spoke to the congregation about a program to help prisoners change their ways of thinking and take ownership of their lives, Richard felt as though God had flicked the back of his head and said “this is the volunteer opportunity you’ve been waiting for; go for it.”

He admits to being nervous at first, but 14 years later, Richard continues to serve as a spiritual guide at the federal penitentiary. He tends to take the inmates no one else wants. He has come to believe that with support, people can change themselves for the better.

On Monday afternoons, he and his wife Erin facilitate a self-help group in the maximum-security section of the Lansing facility. Here, too, Richard believes that being someone from the outside who cares is well worth the possibility of making a difference in someone’s life and direction.

With his Christian faith so foundational to his life and actions, Richard has been a very active member of First Christian Church (Disciples of Christ), Leavenworth, since 1969. He is an elder. He has been chair of the worship department, taught Sunday school and vacation Bible school, and is in the choir and the bell choir. He has been a counselor at the church camp, worked with youth and participated in the men’s fellowship group. This summer, the men’s group raised $12,000 parking cars at the county fair with proceeds going to 12 charitable organizations in Leavenworth.

Richard grew up in small towns in central Kansas where he witnessed the good deeds of his parents. He recalls that his mom fed “hobos” traveling through the state. “We didn’t have much money, but my parents did for others,” he adds. “I guess that’s where I got my start.”

He met his wife Erin while both were students at Emporia State University. Richard taught shop classes and industrial arts in high schools in small towns before he and Erin moved to Leavenworth, her hometown, in 1968. He continued teaching at Leavenworth High School (seven years) and at Pleasant Ridge High School, Easton (23 years). He also built decks and houses, and had his hands in other construction work.

Linda Martin, a family friend who works at Leavenworth Interfaith Community of Hope, knew about his talents. She asked, and Richard agreed to volunteer as project manager for the inside construction of the agency’s new building. Over a nine-month period, he averaged five days a week leading work groups that also volunteered their time. He enjoyed teaching others how to do things to complete the project. He continues to help when called upon for repair and touch-up jobs at the facility.

Linda, an SCL Associate, nominated Richard for the Vincentian Charism Award. She says of the honoree, “He lives his humble servant’s life unknowingly embodying the Vincentian charism – and the world is a better place for it.”

Richard’s other volunteer work involves helping individuals – those who are elderly or who can’t afford to pay for repairs. He may construct a ramp at someone’s home or complete a small fix-it job.

He does this because he can and because he believes in the Gospel message of loving God and loving your neighbor as yourself. It’s as simple as that and as all encompassing. Richard adds, “Everything else is just stuff.”

As Linda wrote in nominating Richard for the award, “It is just his way to keep on going, to keep on teaching and to keep on sharing the love of Jesus whenever and wherever he can. It is what he does and what he is about.” 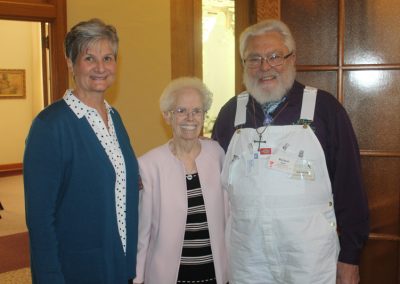 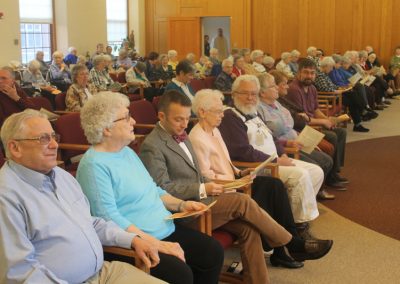 Richard and his guests in Ross Chapel for the Founders’ Day Mass. 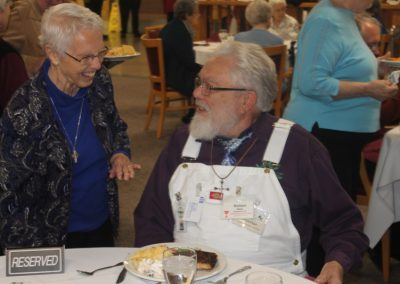 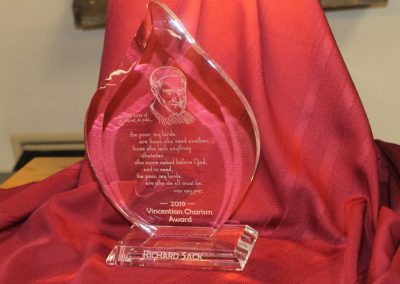 The Vincentian Charism Award inscribed with words of a poem by Sister Mary Janet McGilley, SCL. 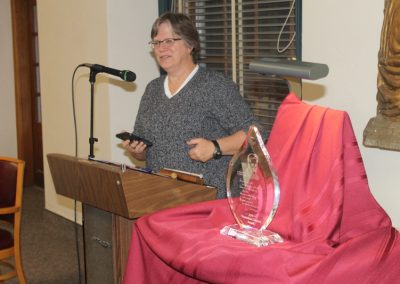 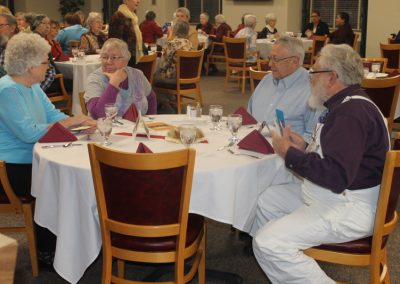 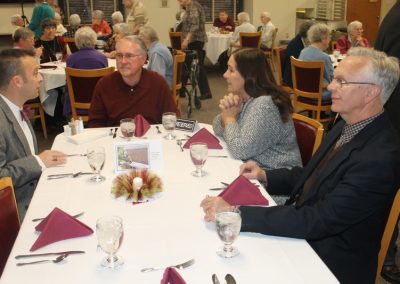 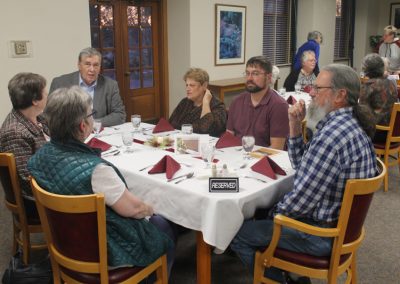 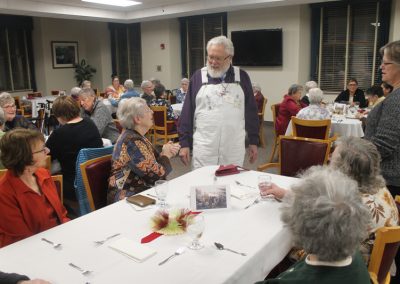 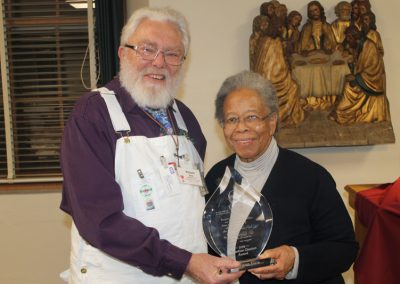 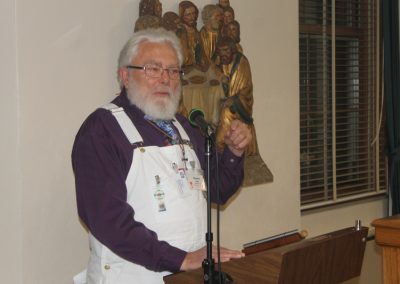 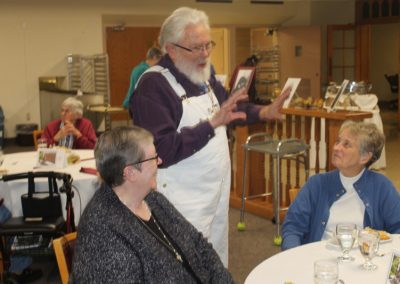 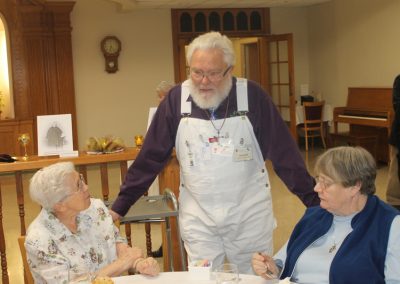 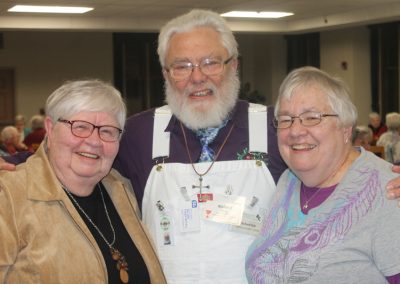 Linda Martin, SCLA, who nominated Richard for the recognition; the honoree; and his wife Erin. 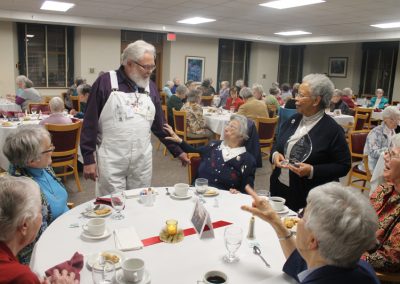