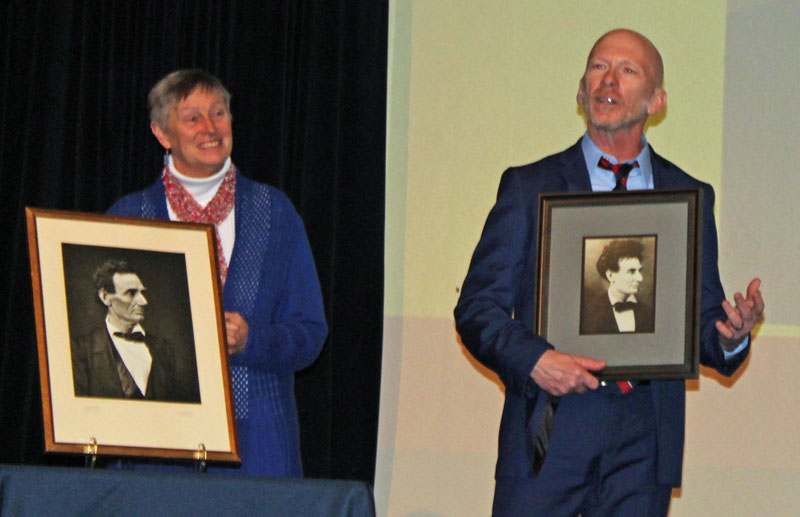 The University of Saint Mary’s 22nd annual Abraham Lincoln Event was something of a homecoming for featured speaker and historian, Dr. Gerald R. Butters. Dr. Butters, who focused his remarks on “Lincoln on Film,” grew up in nearby Kansas City, Kan., and attended St. Patrick Catholic School (K-8) and Bishop Ward High School. Both schools included Sisters of Charity of Leavenworth (SCLs) as a part of their faculty. The guest speaker bragged to the assembly of his 12-year association with the SCLs and expressed heart-felt gratitude for their investment in his educational life, which culminated with a Ph.D. in history at the University of Kansas. In photo above, USM President Sister Diane Steele presented Dr. Butters with a picture from the Bernard H. Hall Abraham Lincoln Collection, housed in USM’s Keleher Learning Commons. 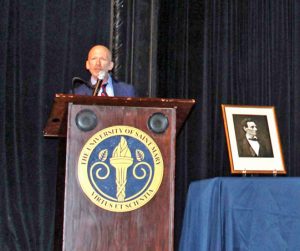 Dr. Butters, who currently teaches film and history at Aurora University in Illinois, related that cinematic portrayals of Lincoln began as early as silent films, but that nothing of real consequence appeared until director John Ford’s “Young Mr. Lincoln” debuted in 1939. Actor Henry Fonda, who starred in the title role, gave movie-goers their first convincing portrayal of Lincoln, even with Ford taking strong liberties with a storyline that fails to coincide with historical fact. Other notable Lincoln portrayals include “Abe Lincoln in Illinois” (1940), which starred Raymond Massey as a folksy, but astute Lincoln on the rise, as well as “Sandburg’s Lincoln,” a six-part mini-series based on the writings of poet and noted Lincoln biographer Carl Sandburg. Debuting in 1974, the mini-series earned actor Hal Holbrook an Emmy Award for his role as the 16th president.

Dr. Butters ended his discussion by citing actor Daniel Day Lewis’ brilliant work in director Stephen Spielberg’s 2012 film, “Lincoln,” as the quintessential Lincoln portrayal, not only for Lewis’ brilliant capture of Lincoln’s mannerisms, but the timbre and inflection of his voice, which critics found especially authentic and convincing, despite the absence of recordings to verify this fact. Dr. Butters said that the script, based on the keen scholarship of historian Doris Kerns Goodwin’s Lincoln book, Team of Rivals, also added to the film’s legitimacy and positive reception. He concluded that while every Lincoln film has to balance dramatic license with history, Spielberg’s vision provides the best telling to date.

At the evening’s conclusion, Sister Diane Steele, president of the University of Saint Mary, presented Dr. Butters with a gift from the university’s collection of Lincoln artifacts. A reception was held immediately following in Mead Hall. 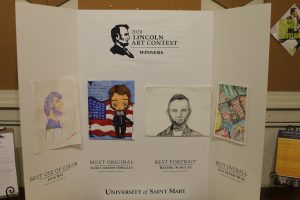 As part of the annual observance, local elementary school students participated in a Lincoln art contest. Winners are (left to right): Jack Bay for Best Use of Color, Zoei Cannon-Shelley for Most Original, Rachel Schultz for Best Portrait, and Gwynevere Buie for Best Overall.