From head and heart to CD 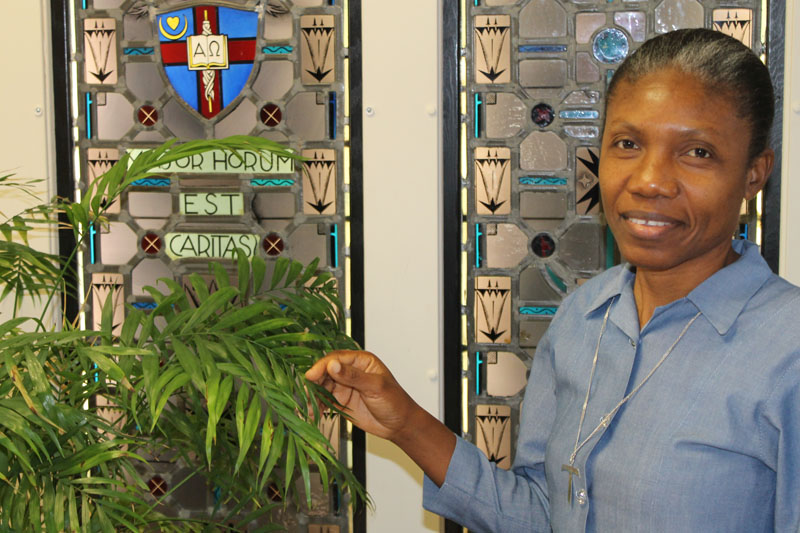 Sister Melicia Singelus believes that singing hymns is the equivalent of praying twice – with words and with music. She speaks from experience as someone who composes music and writes lyrics.

A member of the Sisters of St. Antoine of Fondwa, Haiti, Sister Melicia was in Leavenworth recently for a visit with her friends among the Sisters of Charity of Leavenworth (SCLs). While at the SCL Mother House, she shared that she is planning to record a CD featuring eight or 10 of the hymns she has written. Based on the success of this first recording and the number of Sister’s compositions, the future holds promise of other CDs.

A native of Haiti, Sister Melicia has been writing music since she was 14. While not trained professionally in notes and chord progressions, Sister composes melodies in her head and sometimes audio-records them to help with recall of the music. Her themes are spiritual and include forgiveness, holiness and the Magnificat. She has written about Jesus washing the feet of his apostles and promising living water to the woman at the well. Her lyrics are in French and Creole.

“Always when I pray,” Sister Melicia says, “the words come and the melody comes.”

On her return to Haiti, Sister plans to request permission from the bishop to proceed with publishing the hymns and producing the CD. She will locate someone who can transcribe the music from her memory to paper. She will likely record in Port-au-Prince. Four friends will join her in singing and playing the music. Proceeds from sales of the CD will go toward the ministries of the Sisters of St. Antoine of Fondwa.

Sister Melicia entered this religious community in 2002 and professed vows in 2005. The Sisters of St. Antoine are a relatively new congregation, established in 1996. They operate an orphanage, a K-12 school, a training center and a clinic. They work with women to foster economic development, and they provide spiritual guidance and support. The Sisters of Charity of Leavenworth have assisted the Fondwa community in its development, growth and ministries.

Sister Melicia serves at a pre-school in Tombe Gateau and teaches sewing young men and women in Fondwa. When she can, she makes music part of her day and life.