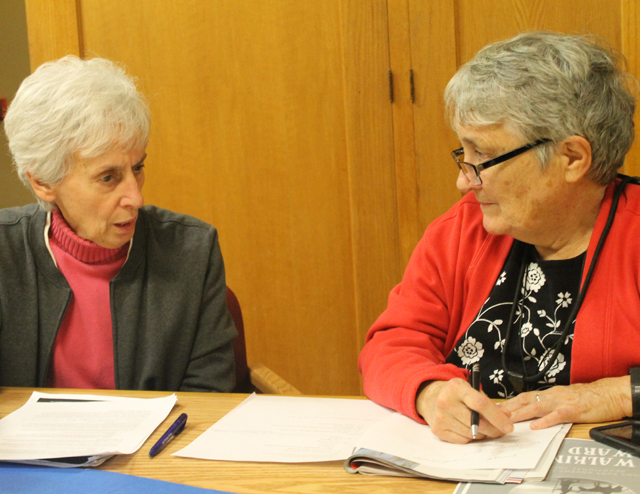 At this challenging time in U.S. history when the arrival of new immigrants and asylum seekers has escalated into a highly divisive issue, two Sisters of Charity of Leavenworth (SCLs) perceive the current situation as a humanitarian and moral crisis.

Their recent experiences at the border in El Paso, Texas, affirmed their beliefs that U.S. immigration policies need major revision, and that protocols pertaining to asylum seekers should be upheld. Responding to a call for bilingual volunteers, 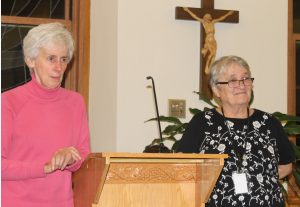 Sister Helen Therese says that in recent years more asylum seekers/refugees are entering the U.S. than immigrants. Sister Sheila explains that refugees come for varied reasons including to escape poverty, violence and instability of governments in their homelands. More recently, the negative economic effects of climate change on crop production are another contributing factor.

Most of the asylum seekers the Sisters encountered were from Guatemala, Honduras and El Salvador and have family members or friends in this country. Immigration workers transported the refugees by bus from holding cells in El Paso to the hospitality centers. Immediately upon the arrival of the newcomers, the Sisters and other volunteers interviewed them and verified contact information of persons listed as their sponsors in this country. They received shelter and donated clothing 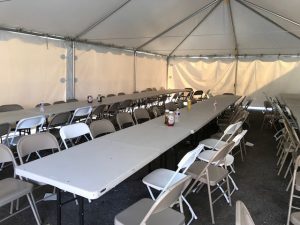 from Annunciation House, and meals prepared and served by community volunteers (in the tent pictured at left).

Later in the day, Sisters Sheila and Helen Therese and other volunteers made phone contacts to confirm the sponsors would pay for transportation and receive the refugees in their destination cities. While completing paperwork, the volunteers gave the telephone to the refugees so they could speak with their relatives or friends. Sister Sheila describes this as a very emotional experience as the refugees anticipated reunions with loved ones.

“What you feel is the impact of the dream about a possible, hopeful future,” Sister Helen Therese says. “Their journeys are marked by spiritual hope and belief in God.”

There’s a quick turnaround at Annunciation House between the arrival and departure of the refugees. After a stay of one to three days pending arrival of their tickets, they are transported by volunteers to bus stations or airports. They travel to join 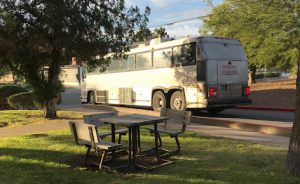 their families and friends. At Annunciation House, another bus arrives with a new group of asylum seekers.

When the refugees reach their destination cities, they already have a date and time to check in with immigration officials. They receive this while initially detained in holding cells at the border. In spite of their hopefulness, Sister Sheila believes the refugees face an uncertain future as to whether they will be allowed to remain in the U.S. or be deported.

“Our immigration laws need a thorough overhaul,” Sister Sheila says. “In the meantime, we could put our resources to better use by adding more immigration lawyers and courts rather than funding militarization of the border.”

She describes the current administration’s approach as use of enforcement and deterrents to manage the situation: prolonged detention, separation of children from families, troops and tear gas. Sister Helen Therese calls this both expensive and immoral.

“The current system is dehumanizing migrants and refugees,” Sister Sheila concludes. “In spite of their hope, the odds appear stacked against them as they try to make a home and a life in a new land.”