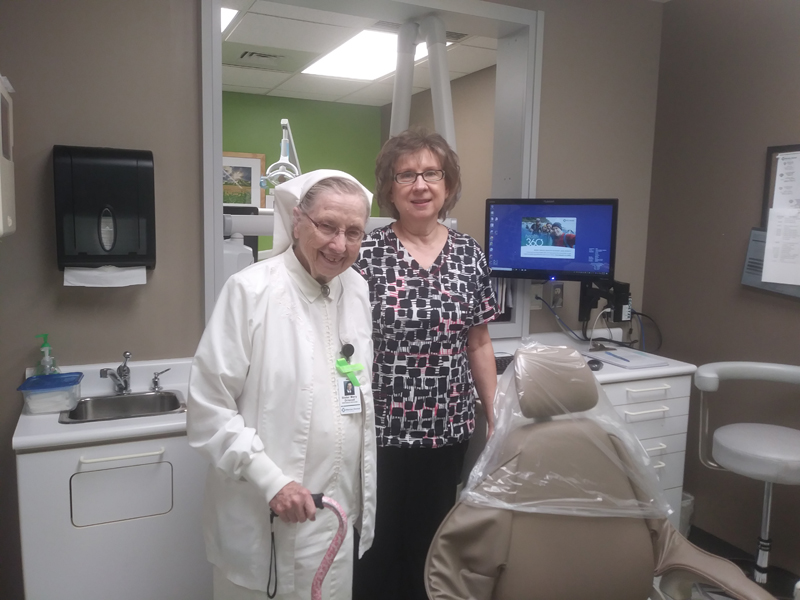 When it comes to continuous service at an SCL Health clinic, Sister Mary Rosaleen Driscoll has longevity. Later this year, she will mark her 30th anniversary with Marian Clinic, Topeka, Kan.

Sister Mary Rosaleen has witnessed and experienced considerable change at the clinic over the years. However, one thing has remained steady. “I’m very passionate about our mission,” she says. “It’s why I’m still here.” Sister Mary Rosaleen is pictured with Donna Miles, dental assistant, whose arrival at Marian Clinic predated Sister’s by a few months.

At the invitation of Sister Concepta Mock, her friend and mentor, Sister Mary Rosaleen joined Marian Clinic on Dec. 1, 1989. The clinic had opened in January 1988 and provided both medical and dental services. Initially asked to take dental X-rays, Sister Mary Rosaleen jokes that she failed that assignment. She very soon found her niche in patient care where she could better apply her extensive nursing experience. Over time, Sister Mary Rosaleen moved into a patient advocate role.

Dental services for underserved persons consolidated into Martin de Porres Clinic that opened in May 1996 in a freestanding building in north Topeka. This dental care eventually became part of Marian Clinic and the health system. With that change, dental staff requested that Sister Mary Rosaleen also spend some of her time interacting with the dental patients. Her familiarity with the dental dimension of services proved providential when Marian Clinic discontinued its primary care services in December 2015. Since then, Sister has continued her patient advocate role at the dental clinic.

Krista Hahn, executive director, says that Sister Mary Rosaleen has a profound impact upon the clinic, staff and patients. She explains, “In addition to being a patient advocate, Sister is a spiritual counselor, comforter, nurturer and educator. She brings the SCL spirit to the clinic and is a constant reminder of our mission.”

“I try to do whatever is needed,” Sister Mary Rosaleen says. On a given day this could include distributing bus tickets to help with transportation; praying with patients; reinforcing the message that dental care is important to overall health; and listening to patients’ stories.