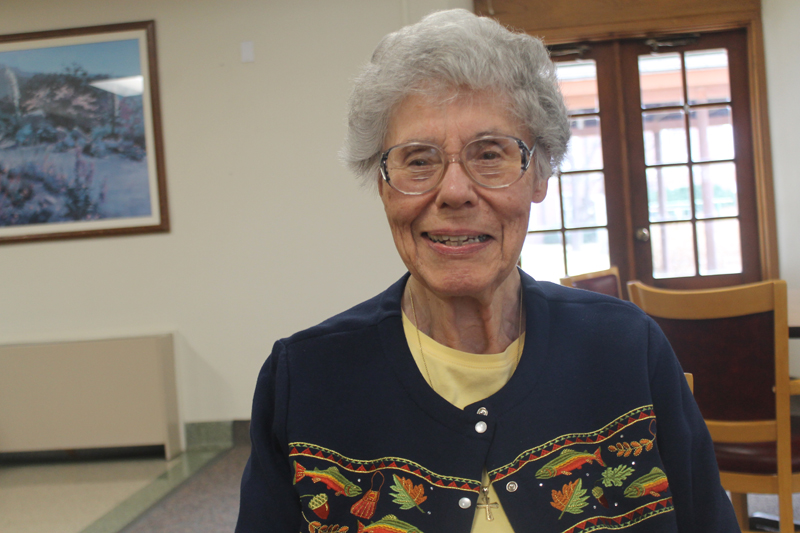 Two different times in her life as a Sister of Charity of Leavenworth, Sister Dolores Erman has had encounters with a saint and with a person who knew one.

First, the brush with a saint by association. Around 1966, while serving as principal of a grade school in Grand Junction, Colo., Sister Dolores answered a knock on the convent door. This was her introduction to Sabina O’Malley, about 80 years old. Sabina had the stature of a wise elder in the Grand Junction Catholic community. She kept the Sisters informed if there were people to visit in the hospital or to acknowledge for donations to the schools.

Sabina’s backstory was that as a young girl she was the companion of Mother Frances Xavier Cabrini, foundress of the Missionary Sisters of the Sacred Heart of Jesus. Mother Cabrini later was canonized the first American saint. She came to Grand Junction year after year during the peach harvest to collect crates of fruit donated to orphanages she and other communities had established. Sabina regularly accompanied the future saint to the orchards. The Catholic Church canonized Mother Cabrini in 1946 in recognition of her holiness and service.

Meanwhile, Sabina grew up, married and lost her husband early in their marriage. She considered it her mission to keep the Sisters posted about important happenings. The Sisters, in turn, highly respected the information and advice Sabina shared.

Some years later, Sister Dolores was attending a meeting of the National Catholic Educational Association in Chicago. To avoid long lines for the guest elevators, she and Sister Mary Rachel Flynn, also an SCL, opted for a service elevator. When the door opened, a male occupant informed the two Sisters they couldn’t enter. However, another occupant – Mother Teresa of Calcutta – told them it was okay.

Because the elevator was slow, Sister Dolores recalls they had a long time to talk with Mother Teresa.
The future saint shook their hands. As they exited the elevator and made their way to the conference session, Sister Mary Rachel said, “I’m never washing this hand again.”

The Church canonized Mother Teresa as St. Teresa of Calcutta in September 2016 nine years after her death.