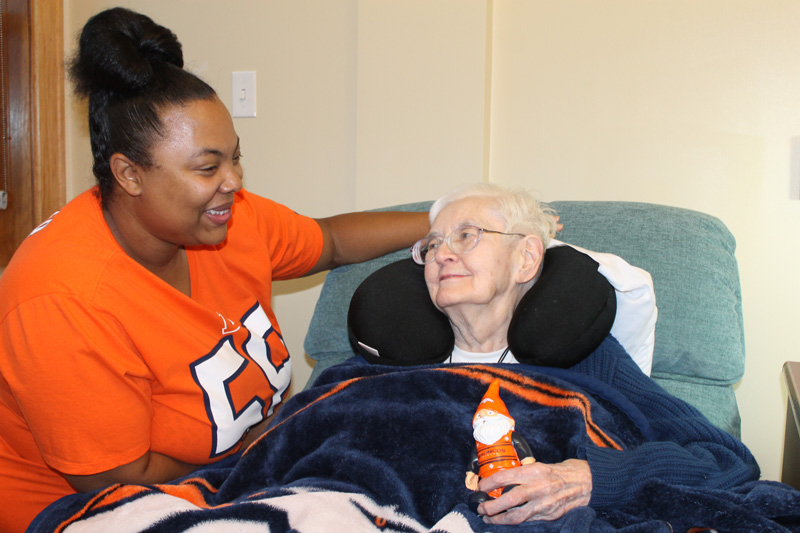 When Kansas City plays Denver on nationally televised NFL football on Thursday, Oct. 17, Margaret Williams, Leavenworth, Kan., will be decked out in her Broncos gear. Cheering right along with her will be Sister Mary Josepha Talle, a Sister of Charity of Leavenworth (SCL).

A few years ago, Margaret realized that she shares more than being a Broncos fan with Sister Mary Josepha. Margaret was born at Saint Joseph Hospital, Denver, a facility then owned and operated by the Sisters of Charity of Leavenworth. She moved to Leavenworth, her mom’s hometown, in 1999.

Margaret has worked at Ross Hall, the SCL skilled nursing facility, as a certified nurse assistant for 14 years. Sister Mary Josepha resides in Ross Hall as did her sister, Sister Mary Andrew Talle, who died in December 2011. Margaret has cared for both of the Talle SCLs.

“I had a connection with her as a newborn baby,” the nurse assistant says, “and I cared for Sister Mary Andrew in her dying days in Ross Hall.”

Only recently did Margaret learn that Sister Mary Josepha was also at Saint Joseph Hospital when the CNA was born. Sister was volunteer services coordinator from 1965 to 1991. It was then that the SCL caught Broncomania.

As for Margaret, she is following in her dad’s footsteps as a Broncos fan. She was living in Denver when the team won its first and second Super Bowls and joined in the celebrations.

Even though the Broncos aren’t winning this season, Margaret is hanging with the team. Other SCLs who are Chiefs fans invite her to jump on the Kansas City bandwagon when she’s ready. But Margaret pledges to be a Broncos fan for life. And so does Kansas City born and raised Sister Mary Josepha. Winning or losing, there’s something about the orange-and-blue Bronco fan frenzy.

Sister Mary Josepha adds, “God must love the Broncos because he often makes the sunset orange and blue.”

Above, Sister Mary Josepha holds her Broncos gnome as she and Margaret exchange stories about their fan loyalty.